Plant of the Week: Wood Betony

FAYETTEVILLE, Ark. – In the perennial border sit an array of flowers, each with their own backstory. Some of these stories tell of modern innovations in plant breeding and slick marketing schemes while others tell of amulets to ward off ghosts. Wood Betony’s (Stachys officinalis) story tells of ghosts, goblins and a long history of uses to keep the aches and pains of life at bay. 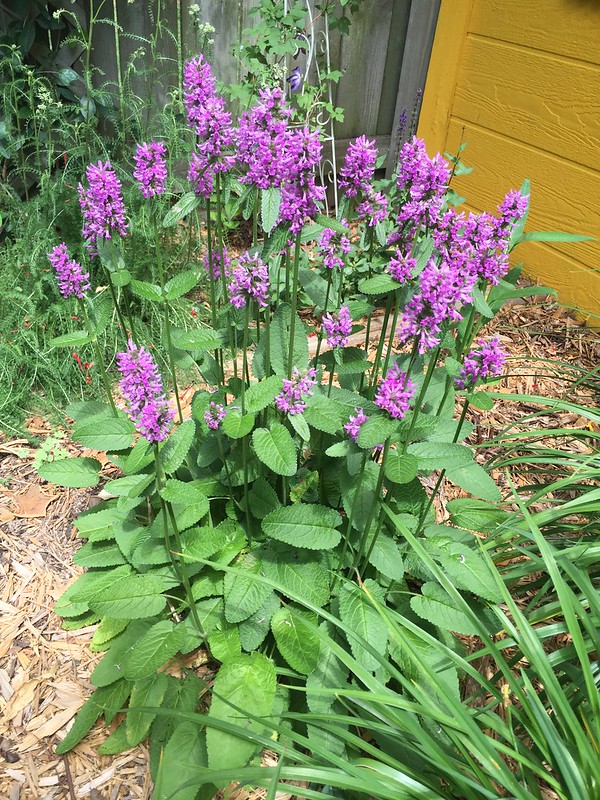 Wood betony is a summer flowering perennial with a long history of use as a medicinal herb. (Image courtesy Gerald Klingaman)

Wood betony is a perennial herb of the mint family, which has about 300 species scattered across the northern hemisphere. This species is native in much of Europe and into the western part of Central Asia where it primarily grows in open grasslands.

It is a clump-forming perennial that spreads slowly by means of slowly expanding stolons, forming a clump of semi-evergreen leaves 8 to 10 inches tall. The leaves are dark green, obovate in outline with a rounded tip, serrate margins and to 4 inches long.  Leaves are opposite with a long petiole and arise from a square stem. Plants spread slowly from their creeping stolons unlike its cousin Lamb’s Ear (S. bysantina) which can be a rapacious spreader.

The erect lavender-colored flower spike is produced in early summer and is held above the foliage on sparingly leafed stems 18 to 24 inches tall.  The tubular, two-lipped flowers are congested together in tight clusters with their overall form resembling a head of grain – the meaning of the Latin name Stachys. Selections are available with pink or white flowers. Plants remain in bloom for 3 to 4 weeks.

The species epitaph given to wood betony “officinalis” means “sold in shops” and indicates the plant has a long history in the pharmacopeia of Europe. The name betony is of uncertain origins but could come from the Iron Age herders of central Spain known as the Vettones (in some translations the “v” becomes a “b”) who came from a region where the plant was common.  Or it could arise from the Celtic word “bewton” which means “good for the head.”

While modern day usage has mostly disappeared for this herb, it is still sometimes recommended leaves be added to tea to make a soothing drink. In Gerard’s 1633 The Herbal or General History of Plants wood betony is recommended for a number of uses including cure from hangovers, headaches, cramps and “it maketh a man pisse well”.

Wood betony is an easy to grow perennial in the border or flowerbed.  It should have an average well-drained garden soil with at least 6 hours of sunlight.  Plants should be given some room and planted away from neighbors that are likely to overpower their basal foliage with exuberant growth in the summer. Propagation is easy by springtime division or by seed.  Once established they are long lived in zones 5 through 9.