If you’ve been listening, bugs are now referred to as animals. While true from a classification standpoint, it elevates what many once considered creepy-crawlers to a more lofty status in the social standing of life. Butterflies, bees, wasps, dragonflies and, I’m sure, others have gained new followers amongst gardeners. 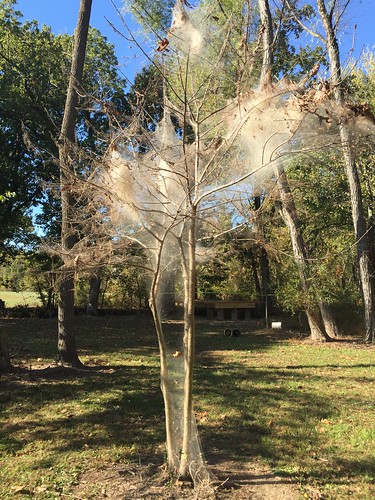 But some things – especially ugliness – will not be tolerated. Fall webworms, while kissing cousins of the butterflies and otherwise checking all the appropriate animal boxes, have no fans.

Fall webworms are a native moth that occurs through all of North America, and now the world, thanks to their accidental introduction to Europe during World War II. The noticeable stage of this ugly pest usually appears from June through August in Arkansas, but if a second generation is produced, can extend into October.

The first visible signs of infestation occur when beige to brown webs begin to irregularly enclose the ends of upper branches. In the initial stages the small, hairy yellow-brown worms feed only on the upper surface of the leaf, but as the size of the caterpillar increases the whole leaf is eaten.

As the colony consumes the initial leaves in the vicinity of where the inch-wide white moth laid its hundreds of eggs, the size of the webby mass increases. The frass from all of this feedings remains in the thick web and becomes piteously ugly. For the first half of the 4- to 6-week period during which the caterpillars feed, all feeding is in the confines of the web. As caterpillars near maturity at 1¾ inch long they leave the web at night to feed.

During the final stage of development, caterpillars leave the web and crawl to a convenient hiding place, such as a thick patch of bark or the leaf litter at the base of the tree, where they form a ¾ inch long brownish pupal case where they overwinter. 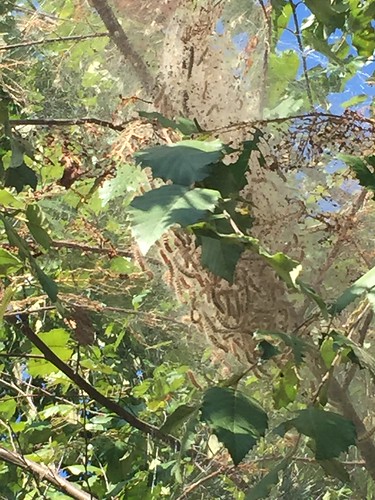 The range of trees attacked by this pest is impressive. Worldwide, more than 600 kinds of deciduous trees have been attacked, but favorites in Arkansas include sweetgum, crabapples, persimmons, black walnut, pecan, hickory, cherry, river birch and occasionally even elms and willows.

Because the fall webworm does its most significant damage during the hottest and driest part of the season when most trees have stopped growing anyways, their damage is primarily considered of only aesthetic concern. Infestations tend to be episodic in nature with back to back bad webworm years occurring about once a decade. However, some webworms will be seen almost every season. Sprays of BT or Sevin directed at the webs and surrounding foliage as soon as they are noticed provide effective control.