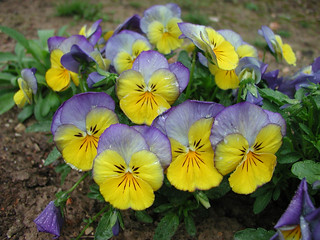 Johnny Jump Ups are like pansies but with smaller flowers and generally stand up better to cold and heat. (Image courtesy Gerald Klingaman)

FAYETTEVILLE, Ark. -- Flower color during the winter is a valuable addition to any garden. In most areas of central and northern Arkansas pansies and their little sister Johnny Jump Ups or Violas (hybrids of Viola x williamsii) are the first choices amongst gardeners. They bloom over a long period and provide tidy low masses of color that keep on giving until overwhelmed by the heat of a muggy summer.

Violets are short-lived evergreen perennial herbs derived from a complex series of hybrids.  Their close kinship to their bigger, gaudier cousins the pansy is easy to see. To understand violas we must first look at pansies.

Pansies were one of the first bedding plants to be developed. According to the Swedish botanist Veit B. Wittrock, after whom the pansy is officially named, the modern pansy is a complex of hybrids between English wildflowers Viola tricolor and V. lutea and a Russian species V. altuica.

Credit for the earliest development of pansies starts in 1812 when an English noblewoman, Lady Mary Bennet and one of the gardeners on her father’s estate, started collecting and selecting improved forms of these wildflowers known as “heart’s ease.” But the gardener at a nearby estate, William Thompson, is considered the father of the modern pansy because he brought all three species together in hybrids starting about 1816. In the 1830s, Thompson found a chance seedling that had a broad, dark colored blotch in the center of the flower and the “faced” pansies became all the rage.

During the 1840s in the Old World there was a frenzy of interest in new bedding plants and many of our modern favorites owe their development to this era. By 1840 there were more than 400 named kinds of pansies and two societies had formed in England to grow and exhibit outstanding forms. These original plants were grown for just the flowers so plants tended to be leggy and not very hardy, but they had big blooms and were pretty.  Pansy flowers typically had flowers two or more inches across.

In the 1860’s show pansies were passing from favor and gardeners wanted hardier sorts.  Another species, V. cornuta from the European Pyrenees Mountains, was added to the mix by crossing with established large-flowered pansies. Though the hybrids had smaller flowers – usually about an inch across – the plants were more compact and had more tolerance of cold.

Heat tolerance has never been much of a concern in the cool maritime climates of Europe, but these hybrids also possess better heat and humidity tolerance. This new series of hybrids were officially described as V. x williamsii in 1897.

The pansy and viola market has never been stronger than it is today because so many gardeners live in areas where these two stalwarts of the winter flower garden can be grown.  Beginning in the 1990’s European and California plant breeders began recrossing pansies and the smaller flowered violas to create intermediate forms with slightly larger blooms (1.5-inch across) and flowers with a wide array of colors and markings. Sometimes these new generation hybrids are called “panolas” to reflect their origins.

Violas are more compact than pansies, usually growing under 8 inches in height with a spread of up to 12 inches. They are reliably winter hardy to zero degrees provided the onset of cold is gradual and plants are kept well watered. At these low temperatures there may be some freeze back but the plants should survive. Ideally pansies and violas should be planted by mid-October to allow plants sufficient time to root in and become established before the coldest weather arrives.

Fertilization in late February will encourage strong springtime growth and assure a strong finish to the blooming season, which ends by mid May. Though still alive and well, violas begin to stretch with warmer night temperatures and simply look too bedraggled to be kept over into the summer.  Northern gardeners, where pansies and violas are not winter hardy, plant them as a spring crop and keep them blooming through their cooler summers.