Plant of the Week: Tubers

One of the most important storage organs in the plant kingdom is the tuber. The reason for this bold statement is that the lowly spud, or more correctly potato, is a tuber. But other plants also produce tubers too such as the sword fern pictured above. 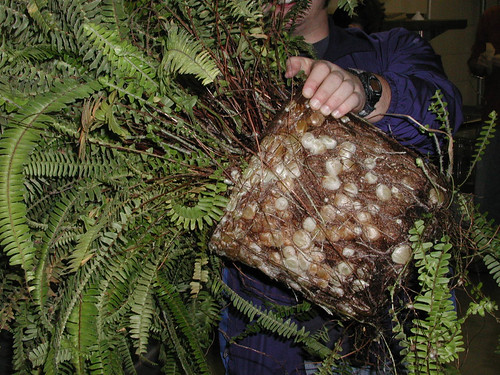 Tubers are a storage structure developed from a modified stem called a stolon. Stolons are lateral branches that may form above ground as seen in strawberries, Boston ferns or airplane plants. When the tips of these above ground stolons touch the soil, roots form and a new plant starts. But stolons may also form below ground and when a bud forms, it may grow into a tuber.

So, tubers are modified stems which means they will have nodes and internodes. The eyes of a potato represent the nodes of the modified stem, so as all potato growers know, you can cut a whole potato into wedges and each will sprout to form a new potato plant. The insides of most tubers have no discernable structure, instead they consist of an amorphous white mass of storage cells loaded with starch.

Tuber formation is found in a wide array of plants in many different plant families. For example, the smooth, marble sized structure formed beneath our native wildflower, spring beauty (Claytonia), is a tuber as is the storage structure of the caladium. Tubers are also found in asparagus ferns, anemones (the odd formless blobs we plant), and the pesky lawn weed yellow nutsedge.

The Boston fern arose in the 1890s as a sport of the sword ferns that had been dug in the wild and shipped to Boston. The florist who received them noticed one plant with weeping fronds that became known worldwide as the Boston fern. It quickly displacing in commerce the stiffly erect growing sword fern. Another big change caused by the mutation occurred below ground. The Boston fern reproduces by above ground stolons that arch over and form new plantlets when they touch the ground while the sword fern spreads by sending below ground stolons that produce a pot full of Thompson seedless grape size and shaped tubers.

Though a slow process to produce a salable plant, each tuber from a sword fern can be planted and will eventually grow into a new plant. Without the tubers to aid them in propagation, Boston fern growers planted mother ferns in moist beds in greenhouses and harvested the new plants from the aerial stolons.

Tuber formation has been found, at least in potatoes, to be partly controlled by a new class of plant hormones called jasmonates. One of the jasmonic acid derivatives has been named tuberonic acid. These are fat based volatile hormones that have been found universally in the plant kingdom during the past two decades. How they work is still being figured out, but it is believed that plants undergoing stressful conditions can be triggered to produce one or more of the jasmonates. These in turn signal the plant to direct sugar towards stored starch reserve (such as in a tuber) instead of sending it to the top of the plant for more vegetative growth.