At heart I’m a lazy gardener. I like to watch things grow but don’t have the patience or aptitude to make things grow that don’t want to. For this reason, roses have never been on my list of favorite plants.  It takes too much work to keep them alive. Rose rosette, a virus disease of roses, is just one of the many ailments that can kill these flowering beauties graveyard dead. 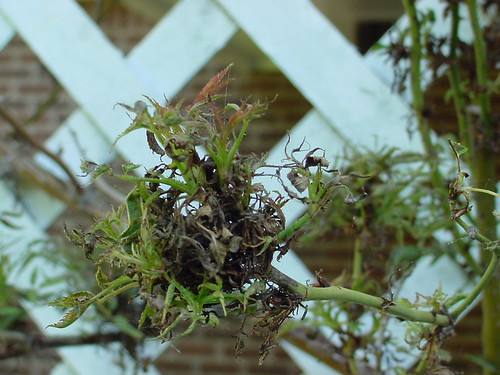 Rose rosette is a lethal disease of roses that causes an array of relatively characteristic symptoms. The disease is usually first noticed in early summer at or near the ends of fast growing shoots. Typically, a witches’ broom symptom is produced with a proliferation of succulent, usually red-tinged, fast growing shoots emerging. These shoots often produce smaller, deformed leaves from stems that have a change in the number and structure of thorns.

Rose rosette virus, first observed on multiflora roses (Rosa multiflora) in the early 1940’s, is commonplace amongst wild and escaped multiflora rose populations east of the Rocky Mountains and is especially prevalent in the southeastern states including Arkansas. The wild population of infected multiflora roses is thought to be the primary source of infection for most cultivated roses, although the disease can be spread by infected nursery stock.

Multiflora rose was introduced as an ornamental from Japan in the 1860’s, but it wasn’t until the 1930’s when it began to be used as a rootstock for budded roses that it began to escape into the wild. From the 1940’s until the 1970’s, soil conservation authorities recommended planting this aggressive grower for soil erosion plantings and wildlife habitat (and even provided free plants with which to do it). It was this last misguided policy that made the plant such a significant escaped weed across so much of the nation.

In the 1980’s, Arkansas had a significant outbreak of rose rosette virus, affecting both wild multiflora roses and cultivated plants. While I can’t find anyone to admit it, some vague references indicate that land managers may have used the disease as a biocontrol method for multiflora roses.

Rose rosette virus never completely disappeared after the 1980’s, and another round of the disease reappeared in the last few years in many rose gardens. The Knock Out roses and related shrub-type roses that were first introduced in 2000 are especially hard hit by the disease, and have been effectively killed out in many landscape plantings. Because the new shrub rose cultivars are so susceptible to the disease and were so widely planted, many people have tried to blame them for the reemergence of the problem. More than likely the disease is spread from the reservoir of infected wild multiflora roses to the garden.

Since the 1980’s, it has been known that a microscopic eriophyid mite that lives in the growing tips of infected plants is the principle vector of the disease. These tiny mites are small enough that they spread on the wind currents and, when control recommendations are offered, it is against these tiny mites. There is no cure for the virus in prize roses so removal and burning is recommended.

While gardeners who have had rose rosette virus spread through their plants are no doubt frustrated, it is probably too early to count roses out. Not all roses are affected by the virus/mite combination so the ability to develop resistant clones is possible. In the meantime, learn to identify the disease and rogue plants from the garden as soon as symptoms present themselves.