Plant of the Week: Reblooming Lilac 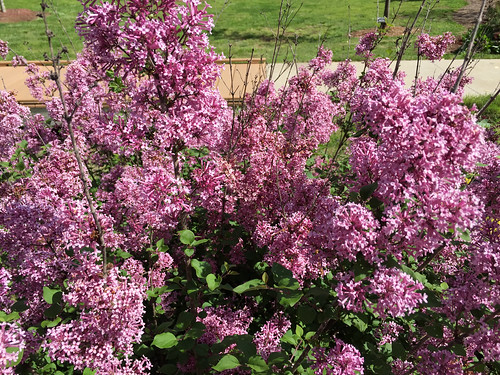 This Bloomerang Purple reblooming lilac has been in the ground four years and shows the compact form of the plant. (Image courtesy Gerald Klingaman)

FAYETTEVILLE, Ark. -- Arkansas is mostly south of the lilac/crapemyrtle line so lilacs have not been a large part of our garden heritage. Here in north Arkansas you see lilacs around and I’ve always told people you could discern from whence their ancestors came by the plants in their homesteads. If they had flowering quince they probably hailed from the Carolinas, Tennessee or Georgia. If they planted lilacs they probably came from Pennsylvania, Ohio or a colder clime.  New reblooming lilacs are getting a lot of hype in the nursery market place so let’s consider Syringa ‘Bloomerang® Purple’ (US PP20,575).

There are only a dozen species of lilacs in the world but they are a promiscuous group and have been hybridized in countless ways to produce the thousands of cultivars that have been named.  They belong to the olive family and are deciduous woody shrubs or trees. Bloomerang Purple is a modest-sized spreading deciduous shrub of about 5 feet in height with a spread of 7 feet.  Leaves are smallish for a lilac, ovate and just over an inch long and three-quarters of an inch wide and resistant to powdery mildew.

Flowers appear in Fayetteville in the last weeks of April and last about two weeks. The plant is heavy blooming in the spring with the purple trusses about 5 inches long and 2 inches in diameter and composed of many smaller individual florets. Bloomerang Purple has a sweet lilac scent that, while not quite the same as the intoxicating fragrance of the common lilac (Syringa vulgaris), is close. Bloomerang Purple begins reblooming in midsummer as new growth resumes and continues to bloom into the late summer and fall. The second crop of flowers is modest but noticeable and is consistently produced. 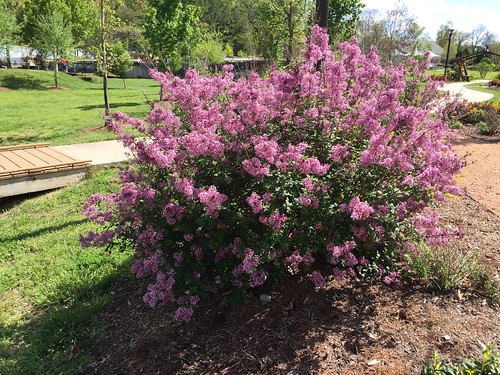 Reblooming lilacs put on their best display in the spring but then begin flowering again in the summer as the plant produces new growth. (Image courtesy Gerald Klingaman)

Tim Wood from Spring Lake, Michigan, gave me my “Plant Nerd” button and was also the breeder who developed Bloomerang Purple. It was grown from seed collected from ‘Josee’ reblooming lilac that was pollinated by an unknown source.  ‘Josee’ has a complicated breeding background consisting of a cross between S. meyeri x (S. pubescens ssp. microphylla x S. p. ssp. patula).  According to Mike Dirr, the reblooming characteristic of this and the other many rebloomers comes from microphylla.

Wood works for Spring Meadow Nursery of Grand Haven, Michigan, a nursery focusing on getting new plants into the nursery trade through their participation in the Proven Winner and Color Choice branding campaigns. Seed harvested from ‘Josee’ bloomed the first season in 2004.  Wood walked the seedling rows and tagged the plants that were blooming in the summer and fall. From the group of plants with tags he selected three that had the highest flagging ribbon count.  In 2008 he selected one and applied for a plant patent where he gave it a cultivar name of ‘Pendula’.  The atrocious name of “Bloomerang” is a trademarked word that denotes reblooming plants of at least two different plant genera.

On the internet you will find columns denouncing the reblooming lilacs that read along the line of “why don’t they just leave well enough alone?”  I’m not a big fan of reblooming plants in general simply because few of the rebloomers I have seen are as spectacular as their once-blooming counterparts.  However, if space is limited and the repeat bloomers work, they make a lot of sense in the garden. And as a marketing ploy they are pure gold because their perceived value jumps significantly over the old fashioned single blooming kinds.

In the garden Bloomathon Purple lilac can be used as a specimen where the fragrance can be appreciated up close or as a smallish hedge or border. Plant them in full sun locations with average soil conditions.  Like most lilacs neutral to slightly alkaline conditions are best.  After the spring flush of flowering is complete, shearing back the plant some will encourage new, vigorous growth and should give a more uniform second flush of blooms. They can be grown in zones 3 through 7.