I didn’t win the big billion-dollar lottery.  Dreams of riches come easily, but in reality success is seldom a lightning bolt out of the blue — but instead a long, slow and steady progression.  Regal Prince® Oak (Quercus xwarei ‘Long’, pp12,673) illustrates the long road to success shade tree breeders take when striving for the gold ring. 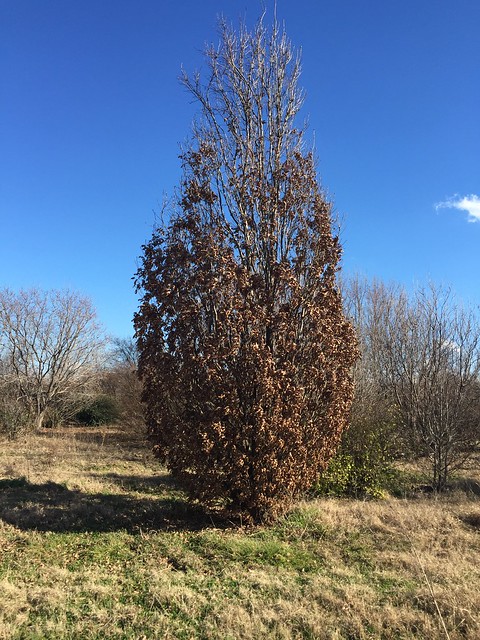 Regal Prince oak is a hybrid oak resulting from a cross between the fastigiate English oak (Q. robur f. fastigiata)and swamp white oak (Q. bicolor), a native Middle American species.  This clone grows 45 to 50 feet tall with a spread of about 20 feet, giving it a chubby columnar form.

It has dark green, round-lobed, glossy leaves to 6 inches long that may have a red tinged fall color on older trees.  Juvenile leaves persist at the base of the tree during winter, dropping as spring arrives.

Regal Prince oak was patented in 2002, 28 years after the acorns were collected from the fastigiate English oak that produced them.  Earl Cully at Heritage Trees in Jacksonville, IL selected several fast growing individuals from a lot of 1000 seedlings he grew and evaluated them over the coming years.  Another seedling from this original cross was named Kindred Spirit® (‘Nadier’, pp 17,604) and patented five years later.

Mr. Cully has patience, a keen eye for selecting good plants, and lots of land where trees can be grown for decades to determine their potential worth.  Heritage® river birch (Betula nigra ‘Cully’), patented in 1979, was Cully’s biggest success and his first entry into the world of protecting intellectual property rights as they relate to better shade trees.

Plant patents provide their patent holder 20 years of protection during which time the patented plant cannot be propagated unless the propagator secures a license from the owner.  A royalty — ranging from a few cents per cutting for some quick-turn herbaceous plants to several dollars per plant for some trees — is then paid to the patent holder.  But in the world of woody plants, the worth of a plant often takes years to recognize, with the widespread use of many plants not occurring until the patent has expired.

To help circumvent this situation plant inventors have adopted the technique of giving a cultivar name such as ‘Long’ for the plant patent application but all promotion and advertising is done under a trademarked name such as Regal Prince® oak.  After 20 years the tree can be propagated without paying a royalty but it can only be sold under the name all nurserymen know if a fee is paid to the owner of the trademark name.  Like an author or a rock star, a plant breeder develops a string of hits over time and secures his or her place in the annals of horticultural history.  Cully has more than a dozen introductions across many species, many of which set the standard for the species.

Many landscape situations have places where a tall, vertical screen would be desirable.  Regal Prince and, if a more narrow tree is needed, Kindred Spirit work well to provide screening or to visually define a space.  They are well suited to a wide range of soil conditions and can be grown from zones 4 through 8.  This hybrid has excellent powdery mildew resistance, a common problem with English oak in the humidity of the South.