Plant of the Week: Oriental Persimmon 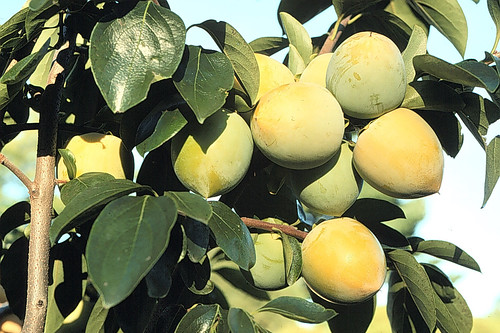 Oriental persimmon has been cultivated for several thousand years in Asia but has had a more difficult time becoming established in American markets. (Image courtesy Gerald Klingaman)

(639 words)
Plant of the Week: Diospyros kaki Oriental Persimmon, Kaki
FAYETTEVILLE, Ark. -- As parents we’ve all experienced the challenges of getting our children to eat something new. Though most adults are more adventuresome, it is really difficult to introduce new food items to a nation. Take the oriental persimmon (Diospyros kaki) for example.  It has been a favorite food in China and Japan for thousands of years, but its adoption in the west has been glacially slow.

The oriental persimmon is a member of the ebony family and one of 485 species of persimmons that occur throughout the pantropical regions and is closely related to our native persimmon.  The oriental species, one of 60 that are described in China, is the most often cultivated persimmon in the world and has been grown and selected in China for more than 2000 years.

It is a deciduous tree growing to about 30 feet tall with a rounded crown when mature. Trees are moderately slow-growing and long-lived. It has 4-inch oblong glossy green leaves that turn orange-yellow in the fall. Trees are blight resistant and retain attractive foliage cover until fall arrives.

The fruit are yellow-orange orbs to 3 inches across that fully ripen after the leaves fall. The four-parted broad and flared calyx is attached tightly to the top of the fruit and gives it an easily identified appearance when seen in the produce isles of local groceries. The fruit of kaki are about five times as large as our native persimmon.

Hundreds of cultivars of this old fruit crop are available and, just as in apples, persimmons vary considerably in their culinary characteristics. Part of the reasons for the lack of popularity of persimmon as a fruit is the puckering experience many of us have experienced when we bit into our first unripe persimmon. This astringency is caused by the presence of high levels of phenolic tannins in unripe fruit that dissipate by either freezing or the slow process of natural ripening. By the time the fruit are fully ripe and mushy enough to eat with a spoon, the tannins are gone and the 15 to 20 percent soluble sugars can be enjoyed.

The cultivars, the first of which were brought back to the U.S. by Commodore Perry in the 1850s when his armada of war ships anchored in Tokyo Harbor and eventually opened Japan up for trade with the Western world, fall into two broad groups. The astringent kinds produce tannins that disappear naturally with cold weather and time and are seen in stores in November. These are the forms most suited for drying. The non-astringent kinds lack astringency and can be eaten while the flesh is still firm and can be eaten more or less like an apple.

Though Oriental persimmons are considered adapted from zone 7 through 10, they are more commonly seen in the warmer end of the zone of adaptation. Several attempts have been made to commercialize the crop in the U.S. but early attempts were not especially successful but in the last two decades there has been a revival of interest and the crop may yet gain a foothold as our population becomes more diverse.

Kaki should be planted in sunny locations with well-drained soils. Because it is a small tree it is well suited near the home but the showy ripening fruit are both a blessing and a curse. The fruit hang on the branches for up to two months after the leaves fall and create an effective display but then they drop and create a slimy mess on any hard surfaces. However, all the neighborhood opossums and raccoons will be grateful for your thoughtfulness.