Plant of the Week: Nuttall Oak 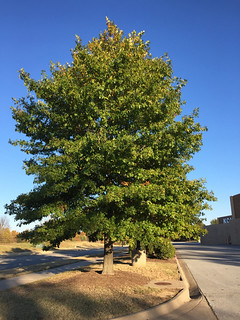 Nuttall oak is one of the most common oaks of the Arkansas lowlands and it makes an excellent landscape tree. (Image courtesy Gerald Klingaman)

FAYETTEVILLE, Ark. -- We plant nerds pride ourselves in being able to identify things, but sometimes we get it wrong. Last year, I was called in to teach a woody plant ID class at the University of Arkansas, and in preparation for this, I started prowling around various commercial landscapes looking for specimen plants.

One especially nice collection of oaks was noted and I identified what I thought were five species. This year, the trees made acorns and I went back and learned there were six.  A planting originally identified as all Shumard oak turned out to have Nuttall oak (Quercus texana) grouped on one end.

Nuttall oak is in the red oak tribe and one of the 40 plus kinds of native oaks found in Arkansas.  It is a strong growing, unbranched tree with a pyramidal form while young that transitions into a round-headed tree 60 feet tall and about 45 feet wide with age.

Upper branches are ascending while lower limbs are held out vertically and don’t droop with age as seen in pin oak. It occurs in contiguous stands along the lower part of the Mississippi River basin from southern Illinois to East Texas and Alabama. In Arkansas it extends up the Arkansas River Valley to about Russellville. It grows in low bottomland situations, sometimes in fairly wet wintertime sites.

Leaves of Nuttall oak are usually 5 to 6 inches long with six to 11spine-tipped lobes and generally on the smaller end of the size scale when compared to look-alikes like Shumard oak and pin oak. To me, the leaves most closely resemble those of scarlet oak (Q. coccinea), a species native north of Arkansas.

New growth of Nuttall oak is often maroon in color. In fact own-rooted clonally propagated forms such as “Sangria” and “Arcade” are available in the nursery trade based on this characteristic.  Each new leaf flush has maroon leaves that transition to green as the foliage matures over about a month. Fall color is usually maroon-red and occurs in mid November. Unlike the look-alike species, Nuttall oak usually drops its leaves in winter.

The identifying characteristic of this species is the acorn. It is a medium sized acorn about an inch long and .75 inch in diameter. The cap covers the basal 30 to 40 percent of the acorn whereas Shumard oak usually has a fatter acorn but the cap only covers the basal 15 percent of the nut. Pin oak, with its smaller acorn and very shallow cap and brownish striations on the side of the nut, is easiest to identify. 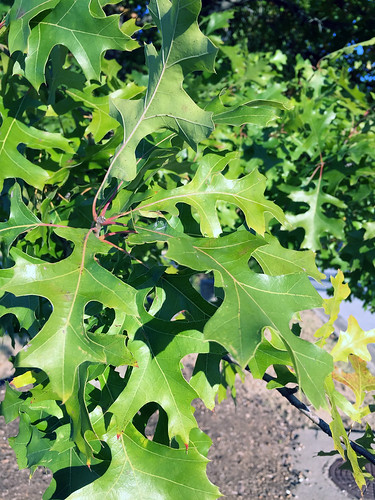 Nuttall oak was first identified as a distinct species in 1860 by Samuel B. Buckley (1809-1884), a man with wide interest in all aspects of the natural world. He was appointed assistant geologist and naturalist for the Texas Geological Survey, working under the supervision of Benjamin Shumard. Born in New York and with northern sympathies, he returned there during the Civil War but returned to Texas where he eventually became the state geologist. Two of the 200 new species of plants he named were Quercus texana and Q. shumardii, whom he astutely named after his boss.

But buried in the dusty files and with little in the way of herbarium documentation, the species got lost in the shuffle until the 1920s when E.J. Palmer (1829 – 1911), an English born botanist with the U.S. Department of Agriculture rediscovered it in east Arkansas. He named the species after another English botanist, Thomas Nuttall who was the first trained botanist in Arkansas who traveled up the Arkansas River in 1819.  Finally in the 1980’s botanists began untangling the confusion over names and now the accepted name is Q. texana with Nuttall oak retained as the common name.

Nurserymen too have re-evaluated the lineup of oaks they grow and Nuttall oak has become the favorite for growers in the southern states. They report it to be one of the fastest growing of the oaks while young, easily transplanted, tolerant of poorly drained soils and adaptable to a wide array of soil pH conditions. While Shumard oak shares many of these conditions, Nuttall oak has a less brooding presence in the landscape with its less coarse leaves.

The tree is well suited for use anywhere a large shade tree is needed. It can be grown in zones 5 through 9.

For more information about horticulture, or to see other Plant of the Week columns, visit extension’s website, www.arhomeandgarden.org/plant_week.htm ,or contact your county extension agent.