Plant of the Week: Gloomy Scale

Being a creature of habit, I eat lunch several times a week at a neighborhood Mexican restaurant in a strip mall planted with a ring of decidedly stressed Autumn Blaze red maples. This year the two-decade old trees were outfitted with a series of slow release water bags adorning their trunks, so I thought I would investigate. That’s when I spotted the heavy infestation of gloomy scale. 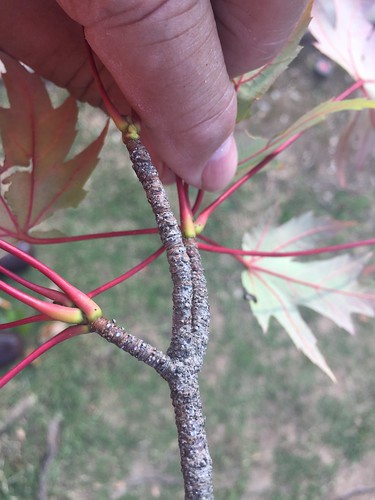 Scale insects come in a number of flavors, including the hard to control armored scales. Gloomy scale (Melanaspis tenebricosa) is one of these. In its adult phase it has a tiny, gray, circular body about the size of the tip of a ball point pen. The insects are perfectly camouflaged to match the bark of the tree branches and crowd together in such high numbers they effectively cover the small twigs. The adult scale is legless and feeds by inserting a piercing mouthpart through the thin bark of the tree into the sugar-rich phloem cells. If in doubt, run your thumbnail down the trunk and inspect the squishy remains you scrape free.

Gloomy scale is not specific to red and silver maples but can attack elms, catalpa, hackberries and sweetgum. It is a naturally occurring insect I found described in a 1904 Arkansas Agriculture bulletin, but was never common enough to cause worry among nurserymen nor gardeners until the past few years. Now, driving around Fayetteville and knowing what to look for, I’m seeing it in a number of locations.

What gives? Why did an insect that has always lurked about in the wild all of a sudden emerge as a potentially serious new pest? Two scientists at North Carolina State University, Adam Dale, a PhD student, and his major professor, Steve Frank, have researched the historical record and examined 2780 living red maples around Raleigh, NC to explain the rapid rise of this insect from obscurity to having significant impact.

The short answer is global warming. By going back through 125 years of red maple branch samples stored in the NCSU insect museum, researchers were able to correlate historic temperature conditions with the occurrence of gloomy scale on the samples. During periods of high temperature, the number and severity of the scale increased; during cooler periods the numbers declined.

By sampling the 2,780 living trees and correlating it to a heat-island map of Raleigh, they found the same effect. Trees growing in cooler areas (average yearly temperature 65⁰F) with plenty of soil moisture had lower levels of gloomy scale than trees from hotter locations (average yearly temperature 68⁰F) experiencing water stress. At the cooler temperature, adult females averaged about 20 live nymphs each, whereas 60 were born at locations with the higher temperatures. Over a few years of reproduction at higher rates, the number of gloomy scales averaged 200 times greater in the hot locations.

The obvious lesson from this is that warming temperatures are having an array of effects and that these effects will be more noticeable and profound, the higher temperatures rise. Delaying the decision to tackle the man-made portion of global temperature rise will only lead to poorer future outcomes.

Another obvious lesson is that we need to reexamine the mix of trees and shrubs we plant in our parking lots and gardens. Natives are all the rage, but if the environment is changing faster than natives can adapt, using some well-suited non-native species is worth considering. And we need to forget the monoculture so often seen in commercial landscape spaces and plant our roadways and parking lots with a diverse array of species. Some will thrive no matter what happens in the future.

Controlling gloomy scale revolves primarily around using dormant oil sprays in late winter or early spring to completely cover all the branches of the tree. Though not impossible, this is a difficult task for large trees. Specific insecticides can be used to attack the scale when they are in the crawler stage, but emergence is over a six-week period so repeat applications will be required. Consult your local Cooperative Extension Service office for current recommendations.