Plant of the Week: Forcing Bulbs

Bulbs predictably bloom outdoors in Arkansas gardens in March and April, but it is easy to trick them into blooming earlier indoors. In forcing bulbs, we get to decide when they bloom, at least within limits. Usually the blooming season of pot grown bulbs can be advanced a month or two without too much difficulty, but don’t expect tulips in flower for Christmas. As a rule, the earlier in the spring a bulb blooms, the easier it is to force. So, crocus, reticulated iris and early daffodils are easier than tulips and late season narcissus. 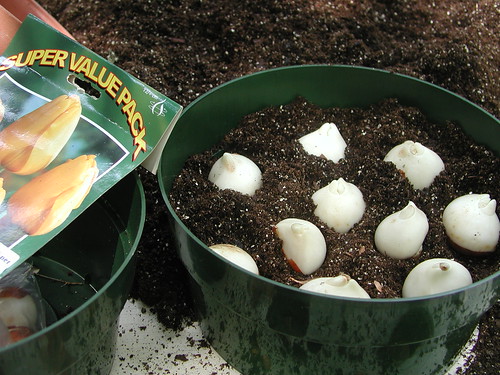 The more bulbs planted in a pot, the more flowers you’ll have come spring, so don’t be afraid of crowding the bulbs into the pot. And don’t be afraid to let bulbs touch. Use a variety of pot sizes and bulb species to provide an attractive spring display and spread the risk in case something doesn’t work quite right. Avoid the temptation of mixing species in one pot.

Any good potting soil will work for bulbs, and because they are a one-shot deal, don’t worry about fertilization. When you pot, remember that the roots come out of the bottom of the bulb, so plant them high in the pot. The soil should come up to the shoulder of the bulb, leaving the nose exposed. As soon as the bulbs are potted, water thoroughly, making sure the soil is wetted all the way through. During the chilling phase, keep the bulbs moist so roots can form.

Once potted, bulbs need to be chilled. The ideal chilling temperature is between 40-45° F. The beer refrigerator in the garage is ideal, but you can also use natural outdoor cooling. I use outdoor forcing with pots sunk up to the rim in a sheltered flowerbed on the shaded side of the house. Then, I cover the pots with two to three inches of mulch to prevent the shallowly planted bulbs from freezing. Foam insulation can be used instead of the mulch, but be sure the potting soil stays moist during the chilling period. Freezing the bulbs, drying out during chilling, being dug up by squirrels or pulling the pots before they have sufficient chilling are the only things likely to prevent the bulbs from blooming.

The length of the chilling period depends on the species. Early blooming bulbs require eight weeks of chilling while late blooming species such as tulips need 12-14 weeks. Midseason bulbs such as daffodils get by with 10 weeks.

Bulb pots that have received enough chilling will have roots coming out of the bottom of the pot and their stems will have an inch or two of new growth. I try to pot several pots of each species, then lift the pots at three different times so I have blooming plants over a longer period in the winter. Extra time in chilling won’t hurt a thing but trying to shortchange bulbs on chilling delays blooming, so make sure they get their full due.

Crocus or grape hyacinth potted and placed outside in mid-October will be ready to start forcing in late December while tulips won’t be ready to bring indoors until late January. With the warm winters we have experienced of late, make sure the tops have begun to force before bringing indoors. If not, give them a couple more weeks.

If the bulbs have had enough chilling time, forcing them is easy; however, growing an attractive plant is something else. The secret to growing a short, attractive forced pot is to provide bright light while keeping the bulbs cool during forcing. Average daily temperatures should be around 55-60°F for best results. The average is what is important, so a 50° night and a 70° day will work just fine. Warmer than that and the bulbs stretch so much it will be hard to keep them from becoming floppy.

Once the bulbs are finished blooming, move them outside in an area where they won’t freeze. When the weather warms, you can plant daffodils, hyacinths, crocus and grape hyacinths in the garden and they will bloom next year. Replanting tulips can be tried, but the likelihood of success is low.