Plant of the Week: Flowering Almond

FAYETTEVILLE, Ark. -- Spring is a season of wanton excess in the garden when plants of all sorts scream for attention.  One of my favorites of these early bloomers is Dwarf Flowering Almond (Prunus glandulosa), a shrub that fell out of fashion amongst “serious” gardeners generations ago but continues to persist in the market place, because who can resist it when it blooms in your local big box store? 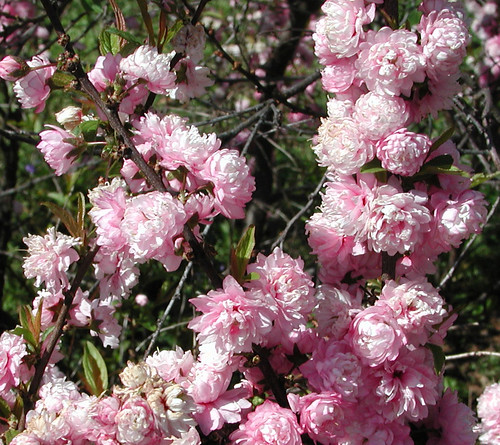 Flowering Almond is an old fashioned shrub with but one season of interest, but in flower it is a show stopper. (Image courtesy Gerald Klingaman)

Dwarf Flowering Almond is a member of the rose family and one of the smallest plants of the 430 species in the cherry genus, which includes such important plants as peaches, plums, cherries, almonds, and flowering cherries.  It is a deciduous shrub growing three feet tall and spreading four feet wide with a multitude of slender, wand-like branches arising from a wide suckering crown.

Leaves are short petioled, oblong-lanceolate with gland tipped teeth at the base of the leaf blade.  Leaves appear after flowering and are medium green, relished by a number of chewing insects and often a bit beat up come fall.  Fall color is modest at best.

Late March and early April is the only time this diminutive shrub shines.  Its slender branches are cloaked in soft pink powder puff blooms that are as wide as an inch across. Only the double flowered forms, ‘Rosea Plena’ (pink) and ‘Alba Plena’ (white), are propagated, with each blossom having 30 to 40 petals.  Fruit are almost never produced on the double flowered forms but will occur on single flowered selections.

In the Flora of China, cherries are listed as belonging to the genus Cerasus, a name used when the fleshy edible cherries are separated into their own genus.  Most authorities use the Prunus as the genus name and reject the narrower view of the group. 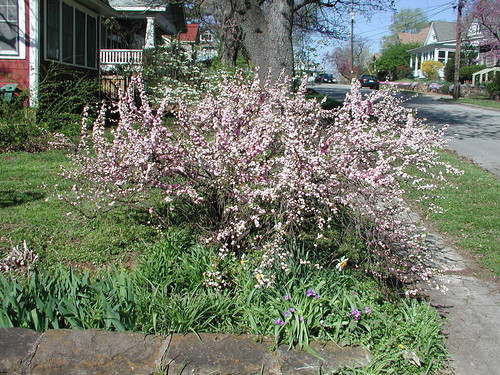 This shrub is native to a wide region of eastern China and was introduced into Japan at an early time.  It made its way to the West in the 1830’s and became commonplace amongst other spring flowering deciduous shrubs such as spireas, quince, mockorange and later forsythia.  Though all of these so-called single season of interest shrubs have been maligned as waste of valuable garden space they persist in gardens because they are tough survivors, cheap to produce and showy when in flower.  The after-image of the blooms retained by the gardeners who plants them sustains them until they bloom again the following spring.

Though Flowering Almond is considered a tough and reliable shrub, it is not all that common in landscapes.  I have found it a bit tricky to get well established, probably because it seems to need more moisture during establishment than some of the other spring blooming shrubs.  In its native haunts it grows on mountainsides and along streams, so make sure it is watered regularly during the first two years of establishment.

It is a diminutive shrub, so a good way to plant it is site it in the kind of location that would be good for a peony planting.  Lots of sun, good soil and where it’s not crowded by neighboring plants is best.  Being a cherry, it is a target of wide array of insects and diseases, so the foliage often ends the growing season badly tattered.