Each week since 1997, Dr. Gerald Klingaman has offered readers a unique window as he chronicles of the social history of plants.

"What always interested me was the background of the plants and how they got there and the people involved in bringing them forward," he said.

Klingaman, a retired extension horticulturist who is now operations director for the Botanical Garden of the Ozarks in Fayetteville, Arkansas, has created is a library of hundreds of plant histories that run in newspapers across the state and have become a favorite of gardeners in Arkansas and beyond. We hope you'll enjoy our extensive archive of his works and return each week to see what's new.

I’m always delighted when a hummingbird buzzes by my patio in search of sweet nectar.  They find me more out of desperation than design, for I don’t do anything special to attract them.  Next year I think I will try to be more thoughtful by planting Red Firecracker Fern or Coral Fountain (Russelia equisetiformis) in my patio planters. 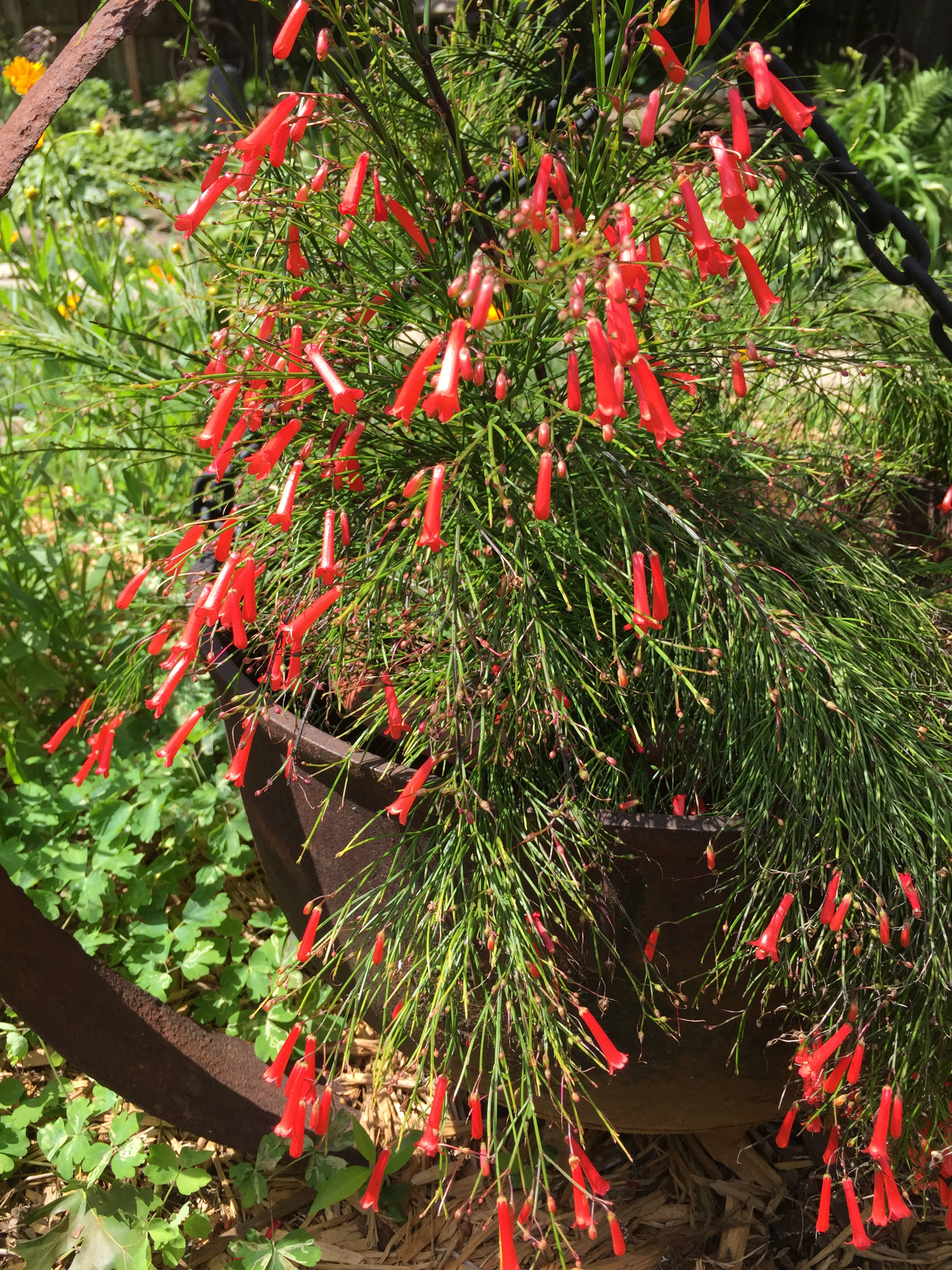 Red Firecracker Fern is not a real fern but a member of the old snapdragon family that has, due to the mysteries of DNA-based classification, had many of its members inexplicably transferred to the plantain family. There are about 50 species of Russelia described from tropical America but only three are listed for sale. This species is native throughout tropical parts of Mexico to Guatemala.

Coral fountain is a common name that gives a good description of the plant.  It is a subshrub that grows about five feet tall and wide with a much-branched stemmy persona that cascades into a mound of branches tipped with tubular, coral-colored flowers.  In really bright sunlight the stems and scaly leaves take on a reddish hue.

The stems are square and green with the leaves reduced to quarter inch long scale-like bracts.  The plant branches freely as it grows, producing smaller and smaller branches as it radiates out from the central mass of the plant.  The smaller outer branches produce pairs of tubular, one to two-inch-long coral flowers that flair into short, two-lipped petals at the end of the tube.

Plants bloom freely during most of the growing season as long as conditions do not become too dry.  Bloom colors vary around the coral to red range but a yellow-salmon form is also offered.  The flowers are specifically designed for hummingbird pollination.

Russelia has been in cultivation for over a century but it was primarily treated as a greenhouse plant.  Only in the past twenty years has it been used much in outdoor plantings.  In 1993 it received the Royal Horticulture Award of Garden Merit.  This recognition and the general uptick in container gardening and new plants – even if they have been around for a long time – spurred interest in the plant.

In tropical zones where temperatures don’t drop below 25⁰F, Red Firecracker fern is used as a shrub much as a temperate gardener might use winter jasmine (jasminum nudiflorum).  But its best use in colder climates is as a summer annual where it can be planted in pots or used in mixed planters.

Red Firecracker fern is adaptable to a wide array of soil types but suffers under droughty conditions.  Plants do best in a well-drained but uniformly moist soil.  The species will tolerate some shade, but flowering is best in full sun conditions.  Moderate fertilization during periods of growth keep the flowers coming.  In the winter plants will continue to bloom if given enough light.

Pruning will not hurt this plant.  It can be cut back to stubby branches a few inches high and will regrow quickly.  Propagation is by clump division or terminal cuttings.