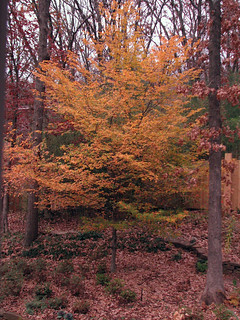 The European hornbeam is one of the few European trees that really thrive in Arkansas gardens. (Image courtesy Gerald Klingaman)

FAYETTEVILLE, Ark. -- I never met a tree I didn’t like, but I like some more than others. I favor trees that are tough and are shaped like the trees I drew with crayons as a child. The European hornbeam (Carpinus betulus) growing in my now 20-year-old shade garden is one of my favorites because it meets both these criteria.

There are about 50 species of Carpinus in the Northern Hemisphere with more than half of these found in China. Two species are known in Europe but only one in North America. They belong to the birch family.

The European Hornbeam is an oval-shaped deciduous tree growing to 40 feet tall and 15- to 20-feet wide. Trees have a strong central trunk with generally ascending branches at the top of the tree while branches lower down the trunk develop wide, almost 90-degree branch angles which give them considerable strength. The oval leaves are 2- to 3 inches long and an inch or more wide with fine teeth running the length of the blade. The fall color is a dependable yellow-gold and appears in early November for me. The tree has no significant flowers.

This tree is the European cousin of our native Carpinus caroliniana (Ironwood, Blue Beech or American Hornbeam) which is common through the mountainous regions of the state. Few European trees have been widely used in the American landscape because the number of trees to choose from is relatively small. Europe’s miserly list of trees is because of the arrangement of the continent’s mountains - they run east and west.  When the glaciers came - the last receded only 15,000 years ago - only the toughest plants were able to survive the climate change and unrelenting push of the ice sheets. In the Americas the mountains run north and south and plants were able to migrate in front of the ice sheets and migrate back as conditions improved. 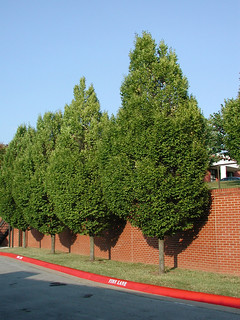 The grafted Fastigiate European Hornbeam (C. betulus ‘Fastigiata’) is more often seen in nurseries than the straight species. It was introduced into the U.S. in 1883 but was never very common until about 1995, when modern day landscape designers attempted to find a substitute for the oval-shaped and symmetrical Bradford pear that had fallen from favor.  It is a fine, tough tree but doesn’t seem to have the cookie cutter look of a boulevard of Bradford pears. But of course, it also doesn’t come with the myriad problems associated with the ornamental pears.

Hornbeam wood was never a wood of much consequence to the commercial forester because the tree trunks never attained saw-log status. It is incredibly tough and has been used for cogs, tool handles and for making wooden bowels and dishes. To the landscaper this tough-wooded characteristic means that the tree will not split apart in ice or wind storms like other twiggy kinds of egg-shaped trees.

The European Hornbeam is an adaptable tree doing well in full sun or medium shade.  It tolerates a wide array of soil conditions but in its natural haunts is typically found as an understory tree near mountain streams.  In my shaded woodland garden the tree has coexisted well even when planted amongst a stand of mature oaks. It takes on a beautiful soft yellow-brown fall color late in the season and gives a dignified end to the fall season. The Hornbeams are not prone to insect or disease attack. Seeds, while they may be produced on old trees, are difficult to germinate and will not present a problem with escapes.