The mix of plants in the local nurseries and big box garden centers is constantly in flux. About the time you think you know what will be offered, they will surprise you with something different.  Golden Duranta (Duranta erecta “Golden Edge”), though not really new, comes and goes in the springtime shuffle of garden plants offered up for sale. 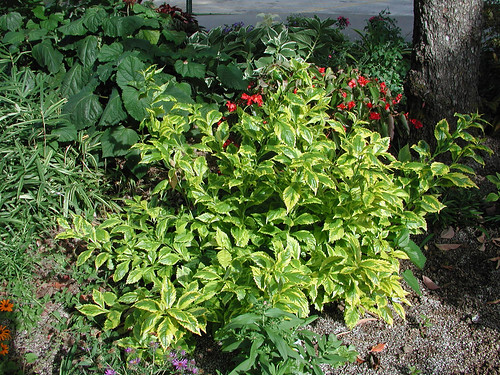 Duranta is a genus of 21 species of tender tropical shrubs and trees in the Verbena family, native to the Caribbean region and adjacent continental lands from Florida, to Mexico and South America as far south as Brazil and Peru. This species grows as a large shrub to 12 feet tall and wide if left unpruned in a tropical climate, where it never freezes. In most cases, however, it is grown as a tender summer annual and only reaches about 3 feet tall during the growing season.

The simple opposite leaves are 2-3 inches long, coarsely serrate and bordered by a broad, irregular band of gold. At the base of each leaf a half-inch-long spine develops that can be a nasty surprise if not expected. “Cuban Gold,” an all gold variant probably selected from “Golden Edge,” is less common and less vigorous but sometimes offered.

Durantas are often referred to as “sky flowers” or “pigeon berry,” because the large panicles of blue flowers resemble the color of the sky and are followed by berries presumably favored by pigeons. But “Golden Edge” does not seem to flower when grown as a summer annual.  In frost free regions, the blue flowers can be produced sporadically throughout the year.

The origins of this variegated Duranta are unclear. The genus was named by Linnaeus to honor a physician-botanist from Rome named Castor Durantes, who died about 1590. By the early 1900’s a couple species were being grown in tropical areas, and L.H. Bailey mentions a white-flowered, golden variegated form sometimes offered.

The modern resurgence in availability began with the new plant craze that swept the nursery industry in the 1990’s and continues to this day.

Golden Duranta is an easy to grow summer annual that flourishes in sunny, hot locations. Once established, it has good drought tolerance and competes successfully in the garden border with established perennials. It can be grown as a part of the mixed border, as an annual hedge plant or in 12-inch containers. Plants can be overwintered inside in a sunny window. Cuttings root easily in late summer.