Each week since 1997, Dr. Gerald Klingaman has offered readers a unique window as he chronicles of the social history of plants.

"What always interested me was the background of the plants and how they got there and the people involved in bringing them forward," he said.

Klingaman, a retired extension horticulturist who is now operations director for the Botanical Garden of the Ozarks in Fayetteville, Arkansas, has created is a library of hundreds of plant histories that run in newspapers across the state and have become a favorite of gardeners in Arkansas and beyond. We hope you'll enjoy our extensive archive of his works and return each week to see what's new.

For several years now I’ve been watching a white, baby’s breath like wildflower in a couple different sunny meadows where I walk my pup.  I could easily tell it was a Euphorbia – one of the spurges – but I didn’t know which one.  So, I finally looked it up and learned it was Euphorbia corollate, the flowering spurge. 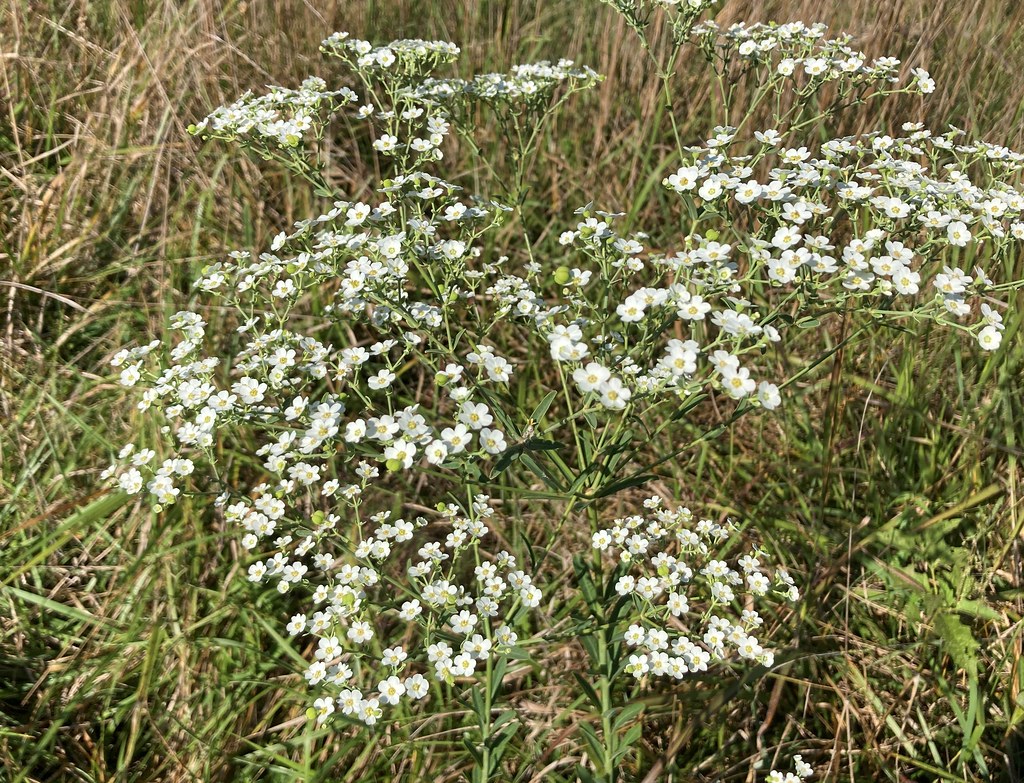 WILDFLOWER — Flowering spurge is one of the most common native spurges, found almost everywhere in the eastern half of the United States. (Photo courtesy of Gerald Klingaman)

This tap rooted perennial herb is one of about 2000 species of Euphorbia distributed throughout the world.  Most euphorbs, though not all by any means, are dry land (or desert) plants that range from cactus-like trees in Africa to prostrate weeds growing in the garden.  Flowering spurge is unusual in that it has adapted itself to blend into a prairie or savannah like habitat.  In this guise it has succeeded nicely as it is found in every state east of a line from Texas to North Dakota.  In Arkansas it appears in virtually every county.

Flowering spurge is erect growing with unbranched stems that reach two feet in height when in bloom.  Leaves are alternate up the stem, entire and to 2 ½ inches long and half inch wide.  Like all spurges, plants produce a white latex when leaves are removed.  They range in color from green to glaucous grey-green.  Open clusters of white, centimeter wide five-petaled flowers with a central yellow dot are produced from midsummer until early fall.

The white “petals” of flowering spurge are not petals at all but modified leaves called bracts.  The flowers in the cluster may be either male or female and, at least to my way of thinking, display some very primitive evolutionary features.  Female flowers, if pollinated, produce the distinctive solitary 3-celled capsule on a short, curved peduncle.

Like all plants, DNA analysis has been used to resolve relationship issues amongst the euphorbs.  But, instead of kicking out certain species because of genetic testing, DNA studies have opened the door wide and several long-established related genera have been folded into the already large Euphorbia clan.  Testing has divided the 2000 species into four clades – plants that can trace their lineage back to one common ancestor.  Three of the four clades are found in North America, though the center of origin for the genus was probably Africa.

Herbaceous plants, especially those that favor dry climates, seldom leave imprints in the fossil record.  So, given the fact that euphorbs are found almost everywhere throughout the world, it seems likely that their ancestors must have been one of the early angiosperms (flowering plants).   If the supercontinent breakup is the cause for their worldwide distribution, they can trace their origins back to the time before the supercontinent Pangea began breaking up sometime during the Mesozoic era about 175 million years ago.   Grasses also have worldwide distribution and are of much more recent vintage, but it is easier to envision birds carrying grass seeds between continents than Euphorbia seeds.

Flowering spurge is offered in the wildflower trade as both seed and established plants.  They should be planted in sites with lots of sunlight and, until established, some room away from other plants.  They can be used in prairie plantings, in mixed borders or at the woods – open land interface.