Plant of the Week: Daybreak Magnolia

FAYETTEVILLE, Ark. -- Spring has such an overabundance of flowers it’s difficult to single out one plant for attention, but even beauty contestant judges have to pick a winner so it can be done. A plant I have admired for the past eight years, Daybreak Magnolia, is such a standout that it deserves closer attention. Many magnolia experts agree, saying that if you have only room for one magnolia this is the one you should plant. 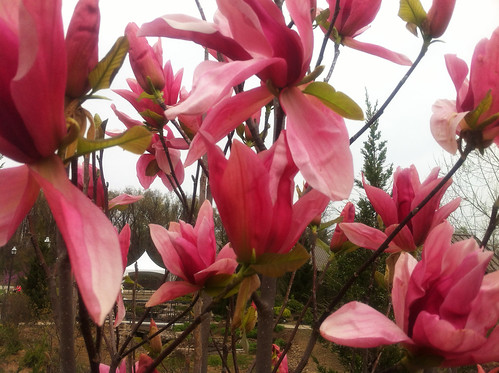 Daybreak Magnolia is one of the most beautiful early spring flowering magnolias in the marketplace. (Image courtesy Gerald Klingaman)

Daybreak Magnolia is a deciduous flowering magnolia with a columnar growth form that will eventually reach 30-to 40-feet-tall with a 20-foot-spread. Leaves are medium green with wavy margins and to as much as 10 inches long and half as wide. Fall color is a modest russet yellow.

The large, fragrant, bright rose-pink flowers are its attention-grabbers.  Buds are tall and bright pink on the outside of the tepals -- petals-- with the inner surface lighter pink to white. Flowers open to have a diameter of 8 inches across. In north Arkansas, Daybreak blooms from the first of April to mid-month, usually late enough to avoid the frosts that plague the early spring blooming deciduous magnolias. As an added bonus, Daybreak is a precocious bloomer with lots of flowers on even small plants with its blooms produced over an extended period of 14 to 18 days, giving it one of the most extended bloom periods of the deciduous magnolias.

Daybreak magnolia owes its existence to the efforts of Dr. August E. Kehr (1914 – 2001), a Cornell-trained plant breeder that eventually ended up working for the USDA in the Washington DC area as scientist and administrator. In 1978 he retired and relocated to Hendersonville, North Carolina, where he continued his breeding efforts without the interruptions a full time job causes.  His most noteworthy contribution to plant breeding was to work out the techniques for storing pollen so that plants that bloom at different times could be crossed.

Kehr was interested in a number of plant groups, everything from developing heat-tolerant rhubarb to pawpaws, but azaleas, rhododendrons and magnolias were his favorites. During his lifetime he introduced 11 azalea hybrids, 14 rhododendrons and 31 magnolias, all of the latter group released from Tranquility Place, his garden in the North Carolina Mountains.

Daybreak magnolia has a complex background.  Kehr hand pollinated the purplish, creamish green Woodsman Magnolia (M. accuminata ‘Klassen’ x M. liliiflora ‘O’Neill’, 1974 registration) with pollen from the large white-flowered M. ‘Tina Durio’ (M. soulangiana ‘Lennei Alba’ x M. veitchii). Daybreak was first introduced in the 1980s and registered as a cultivar in 1990. In 2004 Daybreak Magnolia was awarded the Gold Medal by the Pennsylvania Horticultural Society.  Kehr left behind a large body of scientific work but, aside from his family, Daybreak Magnolia will probably be his most lasting memorial to the time he spent on earth.

Daybreak is a vigorous, easily grown plant in part due to the cucumber magnolia genes it possess and because of its hybrid vigor. It should have a well drained site with full sun and sufficient room to grow.  It makes an excellent specimen plant or can be added as a background plant in the mixed border. Because of its columnar form, some have suggested it for street tree plantings.