A dogwood is blooming in the garden this first week of May that is a real stunner. It has been in the ground about five years, but this is its first significant bloom. Venus™ is its name, and as with all plants, it has an interesting backstory. 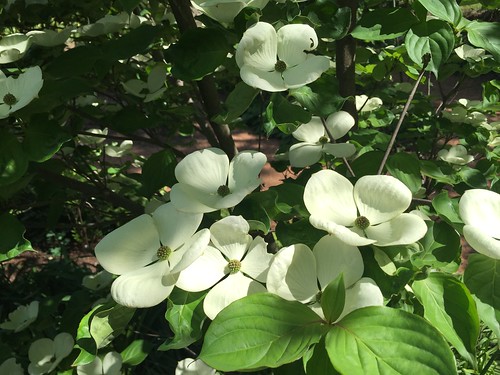 Venus™ dogwood is an upright-growing deciduous dogwood with a dense branching habit that, in a couple decades, will produce a 30-foot-tall tree with a spread at least that wide. It is a fast-growing dogwood, putting on about a foot of growth a year. Leaves are elliptical, 3-4 inches long and similar in outline to our native dogwood, but with a glossy green upper surface and a heavier texture. Fall color is red to orange but not as dependable as our native species.

The show stopping element of this dogwood is its pure white flowers that are as wide as a big man’s hand. Once it starts flowering, it is a precocious bloomer with blossoms almost completely covering the tree. Blooms are produced after the tree has leafed out and about two weeks after our native dogwood finishes flowering.

The four bracts surround a greenish button of true flowers in a field of white. Unlike our native dogwood with its terminally notched bracts, Venus bracts come to a blunt point. The bracts start off light green in color and continue to expand as the flower ages during the blooming process, which lasts for more than two weeks. In late summer, a fleshy round red globe an inch in diameter is produced that bears the seeds.

Venus™ dogwood, officially known as “KN30-8” (PP 16,309), is a complex hybrid that took 30 years to develop and properly evaluate. Admittedly, most of that time was spent waiting and patiently watching the trees grow, but it’s still a long time. The tree was developed as part of the breeding program of Dr. Elwin Orton at Rutgers University in New Jersey. Orton is best known amongst gardeners for his Stellar dogwoods that are hybrids of C. kousa x C. florida, which have a high degree of anthrax and powdery mildew resistance.

In 1973 Orton crossed C. kousa var. chinensis as the seed parent with C. nuttallii “Goldspot,” a tree generally considered ill-suited to the eastern American climate. The sexual compatibility of the Chinese dogwood with the native dogwood of the Pacific Northwest was unknown at the time but Orton managed to collect a few seeds and grow them out. In June 1983, he pollinated the of these hybrid trees with pollen from C. kousa “Rosea,” a pink flowered Japanese dogwood. The resultant seedlings were evaluated for 20 years, with Venus patented in 2003.

Venus eventually will be a larger-than-normal size dogwood, and to best display it, it should not be crowded by other plants. It is a showy tree well suited for use as a lawn specimen or near the patio or deck. It is best in a good garden soil with uniform moisture but is said to have good drought tolerance – an East Coast drought, not an Arkansas drought – once established. Flowering and overall performance is best in full sun but some afternoon shade is always beneficial in our summer heat. It is best adapted in zones 6-9.