Plant of the Week: Clematis Pruning

Pruning is a mystery to many tasked with the care of their garden, so the do-nothing approach is often used.  Vines, of all the garden plants, are most often left unpruned because developing a strategy for controlling these rampant growers and sticking with it year after year requires focus and dedication.   Pruning clematis, often called the “queen of the vines,” is especially confusing because the approach to pruning should take into account when they flower during the growing season. 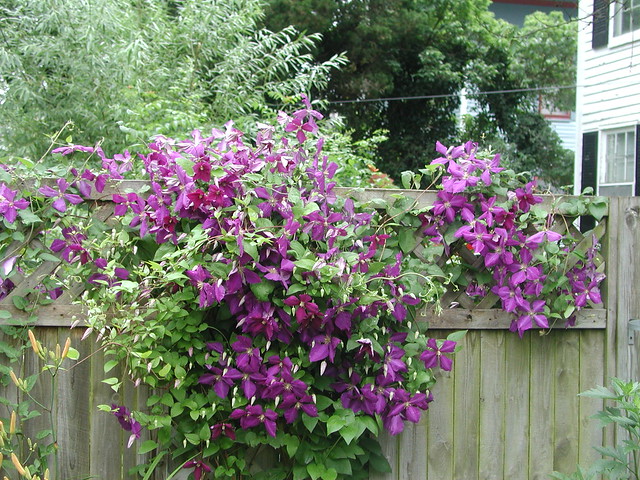 Three hundred species of clematis are described, with their physical forms ranging from clump forming herbaceous perennials to rampant growing evergreen vines.  The more familiar large flowered garden forms are products of a couple centuries of hybridization, using a wide range of species.  Flowering for the various species and cultivars range from very early spring to early summer and into late fall.

The early spring bloomers, called pruning group 1 plants by clematis specialists, produce flower buds on old growth laid down the previous season.  The late summer and fall bloomers (group 3 plants) produce flower buds on new growth produced in the current growing season.  The ones in the middle – pruning group 2 plants – flower in late spring and early summer and may repeat bloom again in the fall.

The most commonly grown clematis are the large flowered hybrids in pruning group 2, such as “Nellie Mosier,” “Fireworks,” “Henryi,” “The President” and many others.  They produce flower buds on year-old wood but also produce new flower buds on new growth during the growing season.

Pruning will only improve a clematis vine, so don’t worry that you will kill or damage the plant if it’s done wrong.  The worst that can happen is that you miss out on some flowers, but that is a small concession for regaining control of an unruly plant.

All newly planted clematis should be pinched back the first season to encourage basal branching and multiple shoots.  Newly purchased plants often have only a single stem, and if not pinched back during the first growing season, it will take several years for the plant to thicken up and produce enough stems for a good display.  If, after the first growing season, the plant is still on the wimpy side, cut it back to four inches during late winter before new growth starts.

Oftentimes, clematis pruning involves attacking plants that have been left unpruned for several years.  Spring bloomers in pruning group 1 — plants such as C. alpine, C. armandii and selections of C. montana — can be pruned back hard (to 6 inches from the ground) as soon as they are through flowering.  Late summer and fall flowering plants in pruning group 3 (“Victoria,” “Star of India,” “Ville de Lyon,” “Jackmanii” and selections of C. viticella or C. texensis) can also be cut back to 6-inch stems in the spring to control growth and ensure good flowering.

Pruning group 2 plants require more finesse.  Ideally, some pruning should be done each year to keep the plants in bounds and to reduce the matted tangle of growth vines can make.  By allowing the plants to make their first flush of blooms and then cutting stems back to lengths of 3-5 feet long, new growth will be stimulated and more blooms will follow in a couple months.  If the plant is a hopeless tangle, pruning back to 6 inches after the first flush will allow time for the vines to regrow during the remainder of the growing season.

Pruning is a good thing for clematis.  It will help control and guide growth, improve flowering and reduce some diseases that plague certain clematis selections.  Be comforted in knowing that even if you botch the job the clematis will come back stronger after pruning and reward you in years to come with more blooms.

For more information about horticulture or to see other Plant of the Week columns, visit Extension's Web site, www.uaex.edu, or contact your county extension agent. The Cooperative Extension Service is part of the U of A Division of Agriculture.