Vines are in all the best gardens, but they take management — or before you know it, your beautiful vine will be attempting to dominate the world, not just your little corner of Eden.  I like clematis because of their beautiful flowers and their more restrained world view.  Mostly, they are content to only take over the mailbox.  Armand Clematis or Evergreen Clematis (C. armandii) is a bit more vigorous, but being a clematis, it can be controlled. 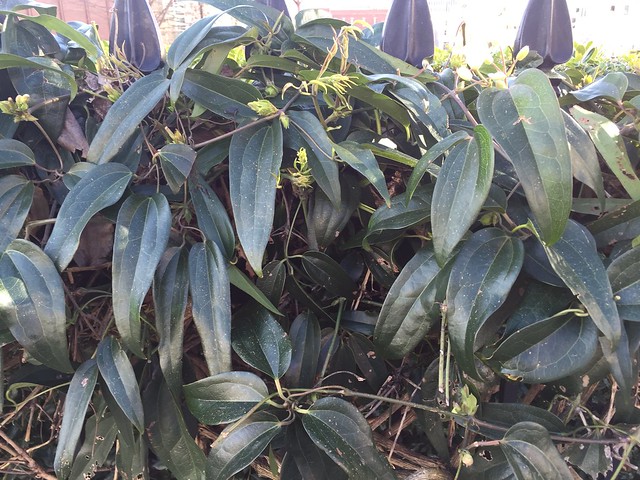 Armand clematis is one of about 300 species of herbaceous or woody vines in the buttercup family found scattered across the northern hemisphere.  This species, native in wide sections of southern and eastern China, is unusual in that it is evergreen and very early blooming.  Vines can grow 15-20 feet long, but because it blooms on old wood from the previous summer, size can be easily controlled by pruning.

It has leathery, compound leaves with three elongate leaflets that grow 5-7 inches long.  The leaves are shiny and dark green when mature but flushed with copper while young.  Like other clematis, they climb by twisting their petioles around support.  They cannot climb a blank wall but climb steel fences easily, can find purchase on a rough textured tree trunk and are good at scrambling across the top of garden shrubs.

Evergreen clematis flowers appear in late winter around the time that forsythia and quince bloom.  Flowering continues for about a month.  The flowers typically are white, mildly fragrant and to two and a half inches across, and produced in large showy panicles.  Pink forms are known but are less common.  Coiled seed heads appear in June.

Armand clematis is named for Pėre Armand David (1826-1900), the intrepid French missionary and botanist who traveled extensively throughout China after the Opium Wars and first brought the existence of the panda to the attention to the world.  He collected specimens in 1885 for botanical identification but cultivation did not happen until 1900, when E. H. Wilson collected it for the English nursery for which he worked.  It did not make it to the United States until 1934, when U.S. Department of Agriculture’s Bureau of Plant Introduction brought it in.

Evergreen clematis is a lovely plant but it is only reliably hardy in zones 7-9.  I have tried it in Fayetteville but it did not survive winter. Its stem hardiness is probably somewhere around 0ºF, but if plants are well established they can survive an occasional freeze back — but of course, all blooms will be lost for that year.

Clematis grow and flower best when the roots are in rich, evenly moist, well-drained soil and the top is in the sun.  Neutral to alkaline pH is not a requirement.  Early spring blooming clematis are the easiest to prune because they can be pruned just as any spring blooming shrub.  As soon as flowering ends, prune them back as severely as needed to control growth or achieve the desired size.  Any late season pruning will remove flower buds for the spring display.

For more information about horticulture or to see other Plant of the Week columns, visit Extension's Web site, www.uaex.uada.edu, or contact your county extension agent.

The University of Arkansas System Division of Agriculture offers all its Extension and Research programs and services without regard to race, color, sex, gender identity, sexual orientation, national origin, religion, age, disability, marital or veteran status, genetic information, or any other legally protected status, and is an Affirmative Action/Equal Opportunity Employer."