Plant of the Week: China Fir 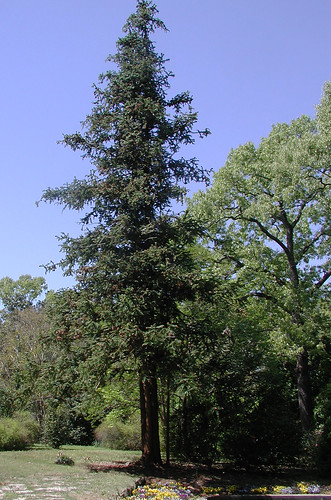 China fir is an unusual, prehistoric looking tree that can be spotted throughout Arkansas. Taken in Dardanelle, Arkansas (Image courtesy Gerald Klingaman)

FAYETTEVILLE, Ark. -- As a plant geek with an affinity for the odd and unusual, I’ve always been attracted to plants that don’t necessarily fall into the contemporary aesthetic view of landscaping. A particular interest of late is understanding plant evolutionary pathways so it is only natural that China fir (Cunninghamia lanceolata) drew my attention.

China fir is a tall evergreen conical conifer capable of reaching 150 feet in height in a mild climate but in most parts of North America it mostly grows in the 30 to 50 foot tall range. Like many conifers it is reasonably handsome as a young plant but with age tends to drop its lower branches and become scruffy looking. It has brown bark that peels off in linear strips exposing reddish inner trunk. The tree, because it is capable of suckering from the root crown, often has several trunks.

Up close the sharp, pointed, lance-shaped evergreen needles are around 2 inches long and spirally arranged around the stem but those on the lower side of the stem twist around to give the appearance of being two ranked. The typical form is a medium green but the selection ‘Glauca’ has blue-gray foliage and is the most often seen in contemporary gardens. The needles persist up to five years and then hang onto the stem for several years after they die adding to its disheveled appearance.

Cunninghamia belongs to the cypress family, and as such, is believed to be the progenitor of this family which contains the conifers such as junipers and arborvitae with scale like leaves. It is monoecious with male and female cones produced on the same plant. The cones are small and inconspicuous and usually clustered at the ends of upper branches in groups of 2 or 3. 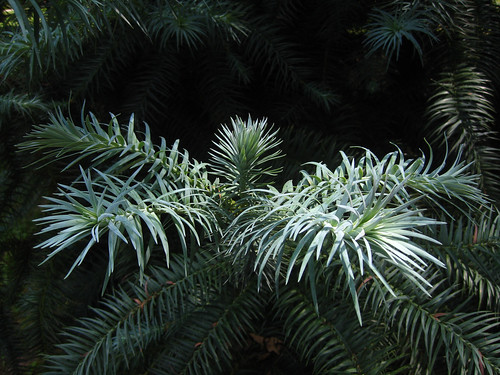 The broad pointed needles of the China fir are distinctive. This is the ‘Glauca’ form which is the most often planted as an ornamental. (Image courtesy Gerald Klingaman)

China Fir once had a wide distribution and fossil records have been discovered in North America. Over the past 300 million years its numbers and species diversity has waxed and waned as the continents have drifted about. Today it is found in South China, Laos, Vietnam and Taiwan where it exists as a single species with two varieties. In China it is an important forest resource where it is widely planted. The wood is insect and decay resistant and has been used in building the familiar Chinese junks, furniture making, home construction and coffins.

Cunninghamia is jointly named after two men. Dr. James Cunningham (d. 1709) was a Scottish doctor working for the British East India Company and assigned to Cochin-China from 1698-1705. He collected 600 plant samples and sent dried specimens back to England in 1701. His experience in China was difficult and included two years in prison for violating complicated settlement rules for the kingdom. He died on board ship while returning to England. The second Cunningham honored in the name is Allan Cunningham (1791 – 1839), an English botanist who collected in Australia.

China fir is an unusual specimen that is fairly common across the South, probably being popularized by some hit-and-run nursery marketing campaign a century ago. Once this initial rush of planting was over, it seems to have lost its allure and today is seldom offered by nurseries. ‘Glauca’, the blue-gray leafed selection, is sparingly available but still hard to find. Cunninghamia is hardy to minus 10 degrees Fahrenheit but sudden cold snaps can kill the main trunk back at higher temperatures. Because of this vulnerability it is usually listed as a zone 7 plant. Though cited as preferring well drained moist sites it is often seen neglected around old home sites where it prospers without any attention.