Plant of the Week: Cannabis: A cultural history

Marijuana dispensaries are opening across Arkansas in the summer of 2019, so it seems taking a look at the long and convoluted history of this plant is in order. 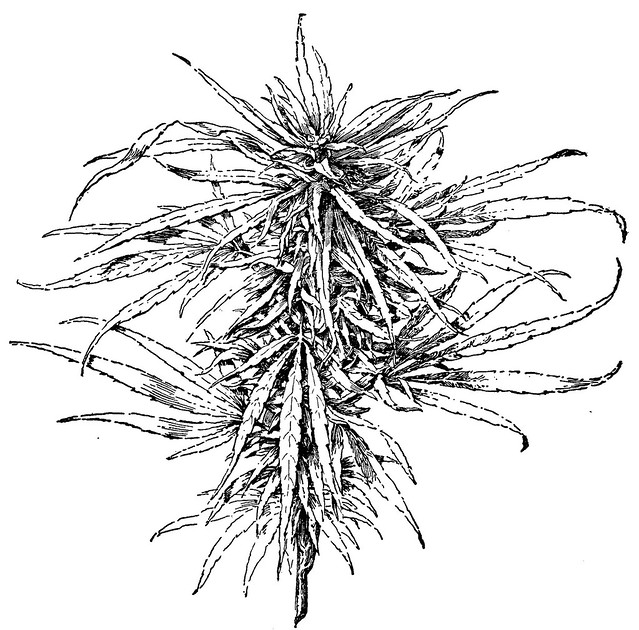 I came of age during the ‘50s and ‘60s, and have been witness to highs (the moon landing, smart phones) and lows (assassinations, never-ending wars), along with a number of unresolved social issues that have woven themselves through the fabric of our society. One of these unresolved issues – marijuana – has bubbled in the background for all that time. With the passage of the 2016 referred constitutional amendment, the tide in Arkansas has turned in favor of this long-vilified weed.

Cannabis sativa, or marijuana, hashish or just weed, is a member of the cannabis family whose closest relatives include hackberry trees and hops. Cannabis is a fast-growing dioecious annual herb that produces stems 6-8 feet tall, with numerous branches and the familiar palmately compound leaf with seven leaflets.

Female plants produce the cluster of aesthetically unremarkable unfertilized flowers that are sold in marijuana dispensaries as round buds, usually about 1 inch in diameter. The flowers are subtended by gland-covered bracts that produce resin droplets that contain THC and CBR, the main constituent of marijuana.

Cannabis is one of those ancient crops that has likely been grown since the dawn of agriculture. Remains of woven hemp cloth about 10,000 years old have been reported from Taiwan. The name Cannabis dates to the ancient Greek botanists who knew the plant and hinted that it had some medicinal uses, but mainly saw it as a fiber crop for weaving. It came to America with the Jamestown colonists in the early 1600’s and both Washington and Jefferson grew it on their plantations.

According to L. H. Bailey’s 1909 (Vol. II), Cyclopedia of Agriculture¸ there were about 20,000 acres of hemp production in the United States, nearly all of it in Kentucky. A smattering was found along the Platt River in Nebraska, and Arkansas had one acre. By comparison, cotton production was 1400 times higher with about 28 million acres in production.

The main species grown for making hemp was C. sativa, a species that probably originated in Central Asia and the Middle East. In 1875 a second species, C. indica with a squattier, more branched habit and fatter leaflets was described as occurring in India and along the Himalayan Mountains to Pakistan. Both of these species had numerous “land races” that displayed unique characteristics that evolved as farmers selected for desired traits.

The introduction of marijuana use into Europe as a drug probably evolved from war and the contact of bored French soldiers with the poorer classes of Egypt. In May 1798, Napoleon brought an army to occupy Egypt. Frustrated with limited success, he left the army behind a year later under the command of his officers. Without wine, the soldiers partook of the local vices. Though the commander in charge (Abdulla Menou) banned hashish use in October 1800, the use of marijuana spread to Europe. In the 1830’s a Scottish doctor wrote of the medicinal properties of marijuana; by 1850 it was recognized as a part of the American pharmacopeia.

By 1900, medical use of marijuana had declined in importance as a new miracle drug – injectable opium derivatives – took its place. Meanwhile, marijuana usage had established itself in the sugarcane fields of the Caribbean and in parts of Mexico where overseers saw it as a way to mollify the overworked and underpaid peasantry that did the hard work. The Mexican rebellion of 1910 chased Mexicans north of the border to escape hostilities; the southwestern states responded by 1913 when they began passing laws banning the use of the “killer weed.”

Meanwhile, blacks from Jamaica and other Caribbean islands found their way to New Orleans, where they introduced marijuana use to jazz musicians who found their ways to the poorer communities of northern cities. Combined with the 18th Amendment in 1920 prohibiting alcohol sales, marijuana became firmly established in the underclasses of American society. In 1937 the Marijuana Tax Stamp Act was enacted at the federal level and users and dealers began doing hard time.

Then the Vietnam War soldiers and hippies entered the scene where sex, drugs and rock and roll became the siren call of a generation. Neither Nixon’s or Regan’s war on drugs was especially effective in stemming the tide of marijuana use. My horticulture classes in the 1970s saw class size quadruple. A decade later a former student confessed many were there because they wanted to learn how to grow better marijuana, though I just naïvely assumed they were interested in garden plants. That surge in enrollment happened across the nation and lead to the many hybrid marijuana lines that converted the not especially potent hemp plant into the potent buds displayed in glass beakers in the now-legal medicinal marijuana shops.

More recently, the tide has turned and the governed have decided that marijuana usage is not as big a deal as our government has insisted it is. At the moment, 33 states have legalized medicinal marijuana; recreational sales have been legalized in 10 states. Perhaps the most surprising issue out there is how little definitive scientific evidence exists about the efficacy/harmfulness of marijuana usage. Like any good argument, no one wants to let facts get in the way.