Plant of the Week: Blushing Bromeliad 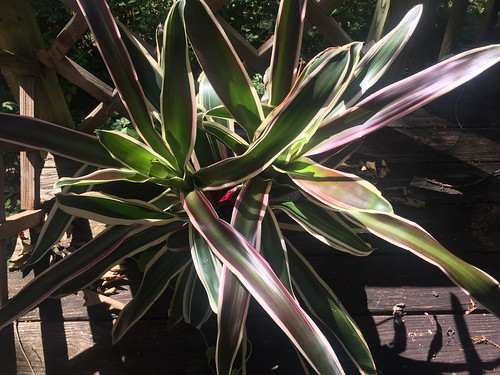 PLANT OF THE WEEK - Bromeliads are fascinating plants that have appeal for we lazy gardeners. (Image courtesy Gerald Klingaman)

FAYETTEVILLE, Ark. -- Confession – so they say – is good for the soul.  Though I’ve never bought a plastic plant, we have several scattered around the house because my wife likes the soothing effect of the green forms in dark corners.  Though I don’t buy plastic, I like plants with staying power that fend for themselves kind of like the fake kind.  The blushing bromeliad (Neoregelia carolinae 'Tricolor') on my patio is real but has some of the permanence of artificial greenery.

Bromeliads are mostly tropical New World plants of the bromeliad family comprised of about 3,500 species in 58 genera.  They are thought to have their origins in the ancient mountains of northern South America in the Guyanan Highlands about 100 million years ago.  But, were it not for the uplift of the northern Andean mountains about 20 million years ago, they would probably have just remained a bit player in the plant kingdom.

With the tumult of the mountain building epoch and the geologically sudden climate change, by 15 million years ago the explosion of bromeliad diversification began to occur with new species spread throughout much of tropical America.  Some spread into the tropical Amazonian basin and perfected their epiphytic ways (grows on a tree for support) while others moved into drier sites and grew roots, anchoring themselves in soil like a proper plant.   During this tumultuous period, epiphytic bromeliads coevolved with insects and vertebrates that lived in their watery whorls and pollinators that assured their survival.  Neoregelia is the largest genus in the bromeliad family with this species native to southeastern Brazil.

The Tricolor Neoregelia is an epiphytic species capable of forming matts a yard or more across.  Its stiff, white or cream striped, spine-margined leaves are an inch and one half wide and to 18 inches long and form a flat-topped rosette.  The Neoregelia have the most colorful and exotically marked leaves of the bromeliad family.  The whorl of the Neoregelia rosette fills with water and is home to many species of insect larvae and frogs which provide nutrients for the growth of the plants high in the treetops.

Neoregelia flowers form inside mature rosettes in a dense cluster that pushes just above the high-water line of the cup.  The three-petaled flowers are not especially noticeable, but the plant signals their presence by turning the basal quarter of the leaves a bright red, making them obvious to all would be pollinators.  This gaudy color display lasts for several months, at which time the blooming plant slowly dies away only to be replaced by new suckers that arise from the base of the parent plant.

I spied my Tricolor Neoregelia in a nursery this spring while looking for patio flowers.  I snapped it up and set it in a patio pot from the previous year, not even bothering to anchor the pot into the old soil.  Now, two months later, I’ve never touched it and it is looking better each week.  While not plastic, its adaptable ways give me the kind of care free maintenance I like in my plants.  By fall the new rosettes should be mature enough to begin flowering so I hope to see the gaudy red splash of color in their leaves.

Maintaining Neoregelia outside in Arkansas in the summer is easy.  They thrive in our summertime heat and humidity and usually pick up enough rainfall to keep the rosette full of water.  They are best in light shade but will not be burned by exposure to full sunlight and will survive heavy shade if that is all that is available.  Keeping the potting soil too moist can cause the basal plant to rot, so make sure the soil is well drained.  Fertilizing monthly directly in the rosette during the growing season with a diluted houseplant fertilizer will keep them growing.

In the winter, Tricolor Neoregelia make good houseplants and will even flower provided you have a bright indoor location.  Because the plants are stiff-leaved, long lasting and very gaudy, some might even confuse them with plastic plants.

For more information about horticulture, or to see other Plant of the Week columns, visit extension’s website,www.uaex.uada.edu, or contact your county extension agent.