Being a bit of a plant nerd, I can’t help but keep records. While I’m way too scatter brained and undisciplined to keep good records, I try to track the growing season by recording the blooming time of selected plants. One of the plants I follow is “Festive,” the first traditional azalea to bloom in my garden each spring. 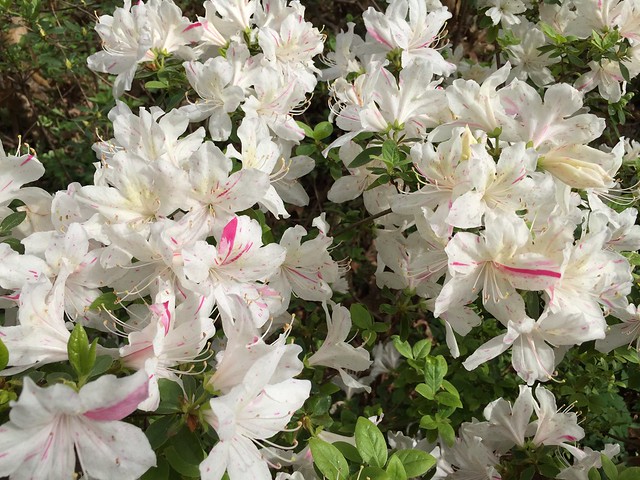 “Festive” is a typical evergreen azalea with single white, 2.5-inch-wide flowers that are flecked red streaks sparingly across the plant.  Though the books say it will grow to 6 feet tall, my 15-year-old plant is only half that.  It has a mostly erect growing form but still spreads out to form an oval as it ages.

Over the past decade I have logged six bloom dates. Mathematically, the average bloom date for “Festive” is April 1, but the range is as early as March 18 (in 2016) to as late as April 18 (2014).  Both of these divergent dates mirror the weather of their respective seasons. In 2014, we had a cold spring with 2 inches of snow in Fayetteville in early May.  This year we had almost no winter, so other than the killing freezes that took out our magnolia blooms, the early blooms mirror the growing conditions.

“Festive” is one of the Glenn Dale Azaleas developed by B.Y. Morrison during the 1930’s and 40’s at the Plant Introduction Station in Glenn Dale, Md. This U.S. Department of Agriculture facility was a receiving station for plants being introduced from around the world by plant explorers. Morrison’s goal in his breeding program was to develop large-flowered azaleas like those seen in the Deep South that would be hardy in cold climates.

The Glenn Dale Azaleas are comprised of 440 clones, mostly released between 1947-1949. As a group, they are cold hardy from zone 6-9 and are generally considered easy to grow, though not as widely available as they once were. “Festive” is a cross between R. simsii “Vittata Fortunei,” an old garden plant Robert Fortune collected in a nursery in Shanghai in 1850 and “Ho Oden,” another old clone of the “Mucronatum” tribe that has been grown in Japan for at least 300 years. The female parent (the first listed) provided the large white striped flowers while the male parent imparted winter hardiness.

Azaleas often get a bad rap as being hard to grow.  But if the planting bed is prepared correctly by incorporating a lot of aged pine bark into the existing soil and perhaps adding15 percent sand (by volume) to assure good aeration and drainage, they are remarkably tough once established.  Azaleas require an acidic soil with a pH between 5.0-6.2.

Bed plant is recommended instead of using individual planting holes, and the beds should be raised about 6 inches to assure good drainage.  Water the plants carefully the first two years to ensure they are well rooted into the amended soil.  They are at their best with light shade or in an area where they get full sun during most of the day but shade from mid afternoon on.

Azalea lacebugs can be a problem in some situations.  Scout for the insect just as the blooms fade and take appropriate action if a population is found.  I have had no problem with this pest on “Festive.”