Plant of the Week: Ashe juniper

FAYETTEVILLE, Ark. -- My sniffling has mostly subsided, so now I know the junipers have finally finished flowering. Arkansas has two native junipers – usually called “cedar” trees – the ubiquitous eastern red cedar (Juniperus virginiana) and the less common Ashe Juniper (Juniperus ashei). Together they bloom over about a two-month period in the late winter and spring and bring grief to allergy suffers throughout the region. 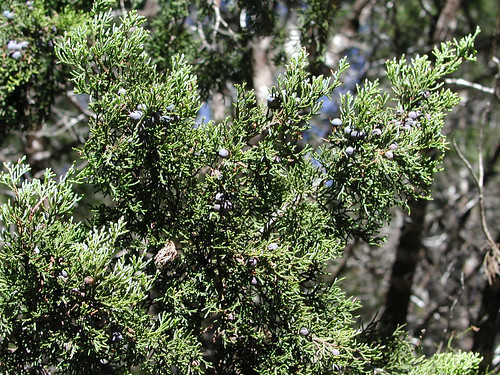 Ashe juniper foliage is similar to the that of the more common eastern red cedar but is stiffer in texture. The seed cones on this female plant are larger and not as round as seen on eastern red cedar. (Image courtesy Gerald Klingaman)

Ashe juniper is a low-branched, mounded, multiple trunked shrubby tree that can grow as much as 30 feet tall but usually is seen at half that because it typically inhabits shallow, limestone bluffs. Trees can become quite picturesque with age. The bark is gray and shaggy and was used by native peoples for weaving and basketry. A common name for this species is Ozark White Cedar because fresh cut logs show pale brown heartwood and bright white sapwood unlike the bright red heartwood of eastern red cedar.

The evergreen needles of this juniper are tiny overlapping scales showing the typical characteristics of members of the cypress family. Plants are dioecious with male plants turning rust colored in late winter as the half-match-head-size male cones disgorge clouds of pollen on dry, sunny days in January and February. The female cones – actually wax covered cones containing 1 or 2 seeds – are blue and to about three-eights of an inch across with several short points sticking out.

Ashe juniper is named for Willard W. Ashe (1859-1932), a North Carolina botanist, who worked for the U.S. Forest Service from 1905 – 1932 and first collected botanical specimens for this species along Sylamore Creek in the Arkansas Ozarks.  Though the Ashe juniper stand in the Hill Country of west-central Texas is more extensive, Ashe’s voucher specimens predate the names coming out of Texas.

The range of Ashe juniper in Arkansas has not changed much since the state was settled but in Texas it has exploded, moving from the dry bluff lines where it took refuge from fires into wide swaths of overgrazed pastureland. In Arkansas the oak/hickory overstory keeps this juniper confined to the barren rocky places it was found, but in Texas the Ashe juniper has expanded to become the dominant vegetation type in many parts of west-central Texas as the pressure of fire was eliminated following European settlement. 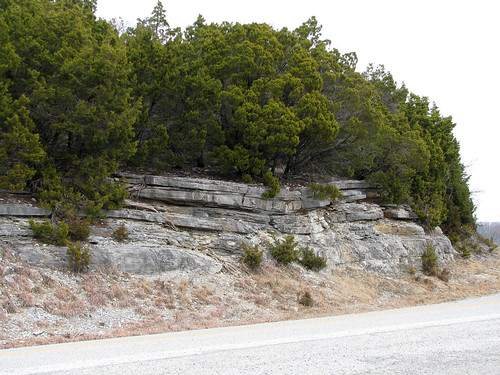 The Ashe junipers in central Texas have a big effect here in Arkansas because the prevailing southwesterly wind during much of the year brings pollen from that region to us during much of January and February, well ahead of the season when our own junipers bloom.

This species is not in the ornamental nursery trade and has little to recommend it for such.  In regions where it is abundant it has long been used as fence posts but otherwise is little used because it doesn’t get large enough to make a proper saw log.