FAYETTEVILLE, Ark. -- Ours is a society obsessed by “important people” who get all the attention while those of us down in the trenches doing the day-to-day work are seldom acknowledged. The same thing happens in the world of plants – some get noticed while others fade into the background.  Viburnums are a large group of plants with many garden fans, but even amongst these some such as Arrowwood Viburnum (V. dentatum) are all but ignored.

In late summer the berries of arrowwood viburnum are blue, ultimately trending to blue-black as they fully ripen. (Image courtesy Gerald Klingaman)

Arrowwood viburnum is a large deciduous shrub growing 8 to 12 feet tall and wide belonging to the newly created plant family the Adoxaceae which was removed from the classical classification in the honeysuckle family. It produces many branches from the central core of the plant and expands by root suckers that grow rapidly upright and straight, making them ideally suited for shafts for Native American arrows. While young the plant maintains this upright oval habit, with age it becomes more relaxed and pendant in its growth form.

Lustrous dark green leaves are 3 to 4 inches long with a coarse, dentate margin that clearly marks it as this species or one of its several look-alike kin. Fall color ranges from nondescript yellow brown to orange or red.  Four species of arrowwood look-alikes range from New England through East Texas, varying primarily in minor technical details such as leaf pubescence and overall plant size. Of these, arrowwood viburnum is the only species commonly offered in the nursery trade but some of the variability in form between the selected cultivars could be because the plants were selected from the look-alike kin.

Creamy white flowers in dense flat-topped cymes to 4 inches across are produced in late spring and composed of small, quarter-inch five-petaled florets. Flowers have a slight musty smell or completely lack fragrance and remain effective for about two weeks.  In late summer and early fall peanut-sized blue to blue-black berries are produced and are eaten by an assortment of birds. Though not especially weedy, a number of seedlings occur under the plants I have been watching.

While arrowwood may have been a favorite arrow shaft choice for the tribes of the eastern woodlands, it was by no means the only material used.  Our native river cane (Arundinaria gigantean) is a widely distributed bamboo and was also used to fashion arrow shafts, oftentimes of the 5-foot-long seen in use by South America’s indigenous peoples. 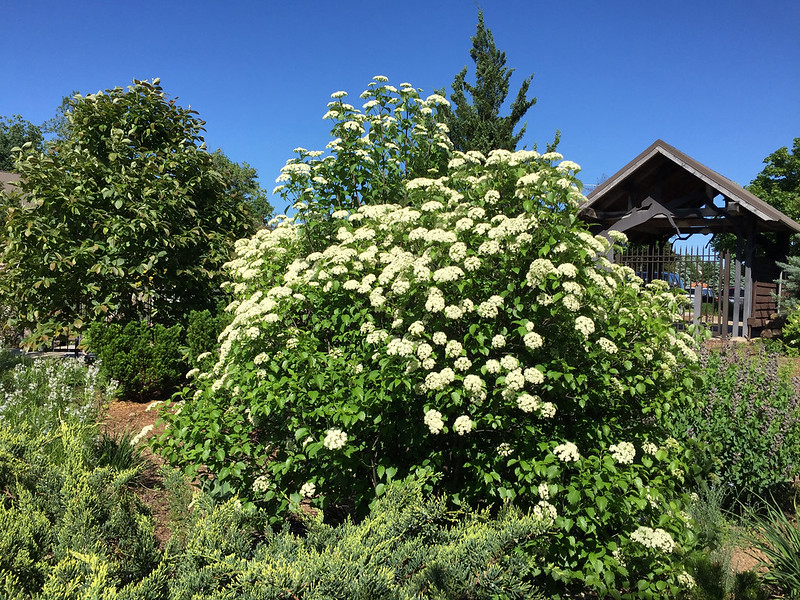 Arrowwood viburnum is a big plant even though dwarfish cultivars are often listed.  Blue Muffin®, a relatively new selection from Wisconsin nurseryman Tom Watson and marketed under the Proven Winner® banner, was originally described as growing 4 to 5 feet tall. Our 8-year-old plants are now 7 feet tall with no signs of stopping.  So, when using them in a shrub border, allow room for growth. They make excellent formal or informal hedges and size can be controlled by cutting back after blooming.  Arrowwood viburnum is one of the most adaptable viburnums and grows well in any reasonable soil.  Though often found in moist areas they have good drought tolerance once established.