Passion and commerce play equal parts in the making of good garden plants.  Without the passion of some inspired gardener, many now mainstay plants would never have been recognized.  But without someone with the passion to make a buck from these same plants, they would never be known by gardeners.  Sometimes it takes a while for the word to get out as is the case with the Aromi deciduous azaleas. 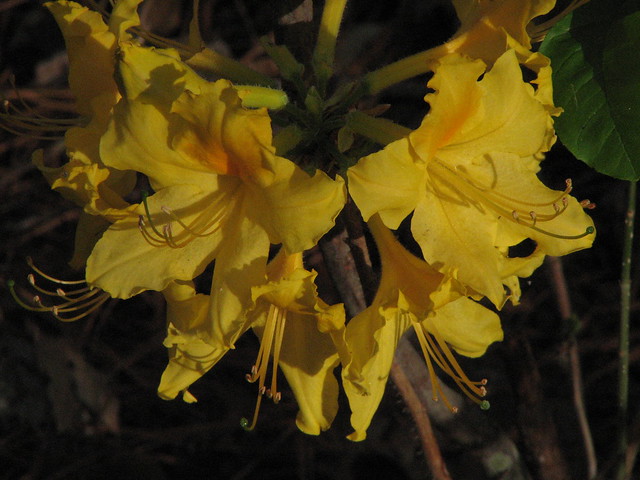 Deciduous Azaleas (Rhododendron sp.) are found throughout Asia and North America, with more than 15 species described in the southeastern states alone (Arkansas has four).  But most gardeners were not introduced to deciduous azaleas by the native species — instead, they became aware of them by means of the garden hybrids such as the Exbury group created in England in the late 19th century.

These showy garden hybrids used species from throughout the world to create large flowered plants in shades of yellow, orange, pink and red.  Unfortunately, they were developed in the cool maritime climate of England, so they performed poorly in the heat and humidity of the South.

In the late 1960’s, Gene Aromi, a professor of education in Mobile, Ala. who died in 2004, started a breeding program to introduce heat tolerance and fragrance into the Exbury hybrids.  He worked with at least four southern natives including the large yellow flowered R. austrinum and the variable flame azalea (R. calendulaceum) with its yellow, red, pink or orange flowers.

Over the next 30 years he made over 1,000 crosses and raised 50,000 seedlings.  From these he named more than 100 seedlings that had showy flowers, fragrance and a tolerance for the heat and humidity of the Mobile area.  These hybrids are mostly big, upright plants capable of growing over 10 feet tall, with blooms in shades of yellow, orange, white and pink.  Most bloom with the late season azaleas in late April until mid May.  Though still not as common in the nursery trade as the Exbury hybrids, they are making inroads as more southerners learn of their superior performance.

Aromi hybrid deciduous azaleas are beautiful specimens when in bloom but blend into the background during the rest of the year.  They make attractive masses in free-standing beds or can be used near patios or decks where their fragrance can be appreciated in the spring.

These azaleas should be planted in full sun or light shade in acidic, well drained soil.  As with most azaleas incorporating copious amounts of aged pine bark into the planting area and planting the rootball high is recommended.  Deciduous azaleas can become leggy over time so pruning back hard just after blooming can reduce this tendency.  Once established they have good drought tolerance.