Plant of the Week: American Holly 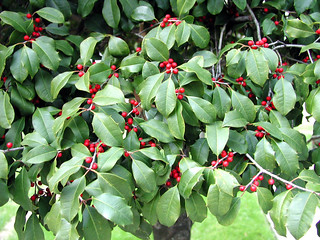 Red berries are found only on female trees and are not eaten by songbirds until spring when the effects of winter rendered them more palatable.  (Photo courtesy Gerald Klingaman)

FAYETTEVILLE, Ark. -- The eastern states have three native broadleaf evergreen trees – live oak, southern magnolia and American holly. Of these the former two have become staples of the American landscape where they are hardy, but American holly (Ilex opaca), never hit the big times because it is so disgustingly slow growing.

American holly is one of about 500 hollies known to science, most of which are found in tropical and semitropical regions of the world, especially Southeast Asia. The United States is home to more than a dozen species. American holly ranges from Massachusetts to Florida along the East Coast, along the Gulf Coast states and up the Mississippi River valley to southern Missouri. In Arkansas it is native south of the Arkansas River and along Crowley’s Ridge where it grows in moist sites as an understory tree.

American hollies can reach 100 feet tall but generally are seen as 30-foot-tall pyramidal specimens. Leaves are evergreen, persisting for three years with oldest leaves dropping in the spring when new growth begins. The leaves are dull to occasionally dark green in color above with a yellow-green lower surface and 2 to 3 inches long with five to 13 sharp spines. The shininess of the leaves varies even on the same trees with older trees producing leaves with fewer spines.

Trees are either male or female with small white four-petaled flowers produced in mid-spring.  The flowers are not especially showy but, on female plants, followed by pea-sized bright red berries in open clusters at the ends of branches. The berries are unpalatable to birds until they go through the rigors of a winter and possibly some fermentation, so they persist through the coldest months. About 15 species of songbirds are known to feed on them. The berries are said to be toxic to humans, but ingestion usually results in vomiting and diarrhea.

Holly has a long association with humankind as a religious symbol and I so wanted the root word for “holly” and “holy” to be the same, but they are completely unrelated. Holly is an old name that probably traces back to roots in the Germanic languages that was apparently the name for the evergreen European (English) holly, Ilex aquifolium.  Much of the religious association with evergreens, Christmas trees and the like trace back to winter solstice celebrations such as Saturnalia observed in Rome and celebrated in mid- to late-December to the Druid celebrations for the return of longer days.

When the Pilgrims landed in Massachusetts they found American holly growing and it was close enough to the English holly to satisfy their needs for wintertime decoration. The tree became popular as a landscape subject in colonial times because it tolerated severe pruning and was useful in the closely cropped landscape style seen today in Colonial Williamsburg and Mount Vernon. George Washington planted a number of American hollies, including some still surviving trees that he received from his friend Henry Lee III, the father of Robert E. Lee.

Even though American hollies are very slow growing, more than 1,000 named cultivars have been selected. These are rarely seen in nurseries because they don’t grow especially well in container production. Instead, hybrid American hollies, especially Ilex x attenuata ‘Greenleaf’, which has a look much like its American parent but grows faster, is substituted.

American hollies or their hybrid counterpart should be grown in moist but well-drained sites.  They transplant poorly unless container grown or dug balled and burlapped. They make great specimen plants but can be maintained at about any size by wintertime pruning before new growth begins. To ensure berry set a male pollinator that blooms at the same time must be planted in the vicinity. Though it takes a generation to get a nice looking American holly, it is well worth the wait.