Plant of the Week: Akebia 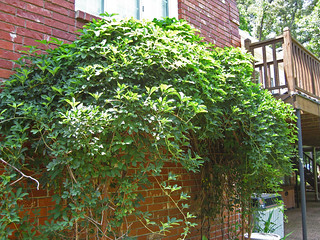 Akebia is a fast-growing twining vine that is relatively easy to contain provided its escape routes are blocked. (Image courtesy Gerald Klingaman)

FAYETTEVILLE, Ark.  -- In garden making, sometimes you need the traits that vines have to offer. But vines are scary, very scary. They all seem to have one thing on their little sylvan mind – world domination. Give them an inch and they will take a mile. But having just completed a 30-foot-long tunnel-shaped trellis, I needed one and finally settled on Akebia (Akebia quinata) for this addition to the Children’s Garden at the Botanical Garden.

Akebia is a fast-growing, woody twining vine belonging to the Lardizabalaceae family, a small family of mainly Asian climbers taking its family name from one of only two species found in South America. Akebia is native to Eastern China, Japan and Korea where it typically grows on mountainous slopes and at the forest edge.

This fast-growing vine is usually listed as growing to 30 feet that is a good approximation because I consider it in the “medium” category of vines in terms of vigor and overall size.  Wisteria, Kudzu and wild grapes hold the top rank in my vine vigor scale with clematis representing the wimpy end.

The unusual maroon flowers appear in early spring in panicles just after new leaves emerge.  The flowers lack true petals but the sepals are petal-like with individual blossoms to 1.5 inches across for female flowers and about half that for the more numerous male flowers. They have a vanilla scent that sometimes give rise to the common name “chocolate vine.” The fleshy fruit are seldom seen in cultivation unless cross-pollinated by a different clone but are sausage-shaped, purplish in color and edible. 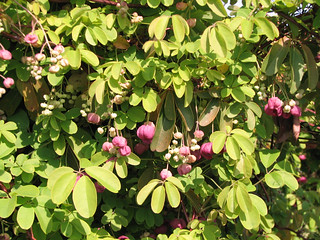 To grow any vigorous vine without fear of being overrun by it requires isolation. Plants should be placed where errant shoots can be found and removed before they encroach on nearby plants.  My Akebia at home has grown on a part of my front deck railing for more than 10 years and I’ve found it relatively easy to manage by snipping here and there during the summer as it gets too rambunctious and attempts to expand across the top rail of the deck.

The base of the plant is behind some azalea plants and over time I have discovered that the plant has sent out long slender vines on top of the ground to nearby plantings with better light.  These ground hugging vines can be easily removed before they cause trouble but if missed new plants can be established where not intended. These slender, tough but flexible, vines are good for wreath making or basket weaving.

Akebia is hardy from zone 5 through 8 and grows equally well in sun or shade.  It is ideally suited for isolated garden trellises, seating areas or covering pavilions.  It can also be used as a groundcover for exposed banks but a mowing edge should be maintained on all sides to control the limits of its spread.  It is fast to establish in any reasonable soil and, once established, drought tolerant.  Pruning can be as severe as necessary to keep plants under control.