Old curmudgeons like me think gardening should be all about the plants, but a new subset of gardeners seem of the opinion that we should only grow plants that feed the bugs. Looking over a snapshot of a golden alexanders (Zizia aurea) in bloom, I saw that this native wildflower had five different species of insects feeding on the flowers at one time. The bug lovers definitely want this one. 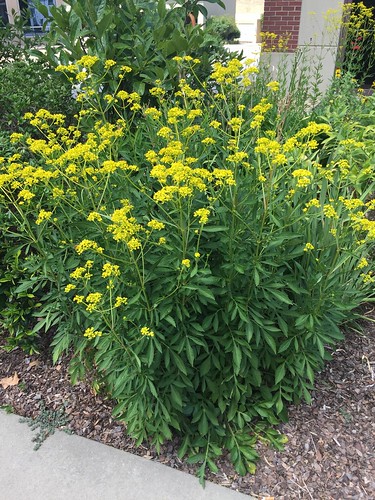 Golden alexanders is one of three species of perennial herbs in the carrot family found throughout North America, excepting the desert southwestern states. This species is found in moist prairies and fertile forest glades in the eastern states and throughout the upland portions of Arkansas.

Plants grow erect, to three feet tall with bright green bi- and trifoliate leaves. The serrate margined leaves at the base of the plant tend to be cut into three leaflets where those higher up are divided into two wedge shaped segments.

The yellow, flat-headed umbels of golden alexanders are in multi-flowered clusters 2-3 inches across and produced in open cymes at the top of the plant. Individual flowers have five petals but are tiny, maybe 4 mm across. They produce a lot of nectar, so are favorites of short-proboscis insects. Flowers begin appearing in April and are produced until early July in North Arkansas. The foliage is a favorite of caterpillars of black swallowtail butterflies. Seeds appear in late summer and can be produced in abundance. In a summer-wet site golden alexanders can become weedy in the garden.

Identifying yellow flowered species of the carrot family is a bit difficult because some have very minor structural differences. For example, Meadow Parsnip (Thaspium trifoliatum) differs from golden alexanders in the fact that the tiny central flower of an umbel is stalked on the former while on the latter it is sessile.

Similar confounding differences in separating the Old World species seem to be the root for the name “alexanders,” the English and French common name used by Gerard and other herbalists in the 16th and 17th centuries to describe several European speces. Linnaeus originally named the North American golden alexanders Smyrnium aureum, but in 1824 it was reclassified as Zizia, a name given in honor of a German botanist Johann Baptist Ziz (1779 – 1829).

Golden alexanders is said to be a short lived perennial, but if given a sunny, moist site it will persist for several years and replenish itself with seedlings. Plants at the Botanical Garden of the Ozarks persisted for more than six years and did not reseed for us. In partially shaded sites it may be more permanent but flowering will not be as strong. Plants are best used in meadow plantings or in the mixed border designed to attract insects. If reseeding becomes an issue, cut off the bloom stalks before seed mature in the fall.