Last week I made the rounds inspecting some trees I planted at the Ag Experiment Station in Fayetteville, and was glad to find most of them doing well and prospering. The tour got me to thinking about all the grand old specimens of odd and unusual trees we periodically happen upon around our communities. Oftentimes both the identity of the tree and any remembrance of how it got there is lost.  To forestall this eventuality for one of the unusual trees I planted in 1993, let me introduce you to a Chinese Zelkova (Zelkova schneiderana). 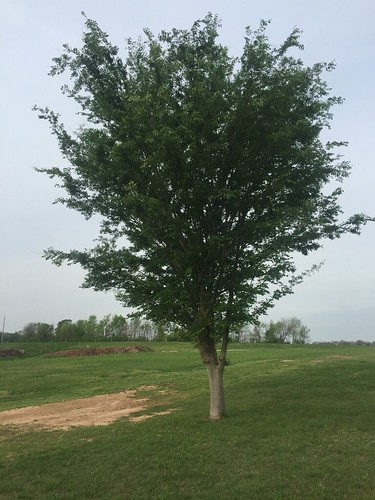 Zelkovas are a group of six deciduous trees of the elm family scattered across China, Japan and southern Europe in and around the Mediterranean. Until about two million years ago they were common in North America, but the Pleistocene glaciation drove them to extinction here.

Zelkovas are uncommon landscape trees, with only selections of Japanese zelkova – especially a clone called “Village Green” – found in the nursery trade.  They were promoted as replacements for American elms after Dutch elm disease devastated our native tree during the middle of the last century, but they never caught on in a big way.

Chinese zelkova is a big, round-headed tree capable of attaining 80-100 feet of height and spread. It is native across much of central and southern China where it grows along streams and, in western provinces, on mountain slopes up to 6,000 feet. Trunks take on a smooth, exfoliating character and give the tree a handsome wintertime presence. Leaves are two to three inches long, elm-like in appearance and covered with a stiff, scratchy pubescence on the upper surface. Fall color is said to be a good yellow-orange color.

Flowers are ornamentally uninteresting, with plants producing both male and female flowers on the same tree but not in the same flower. The fruit is a small kidney bean shaped drupe somewhat akin to a hackberry fruit that ripens in the fall. In more than 40 years watching zelkova, I have never noticed fruit on the trees in Arkansas.

The Chinese zelkova is named for Camillo Karl Schneider (1876-1951), an Austrian botanist who visited China between 1913 and 1915. Upon leaving China he worked at Harvard’s Arnold Arboretum alongside Professor Sargent and E. H. Wilson until returning to Germany after WW I. The name zelkova is taken from the dialect of the people in the Caucuses Region of Southern Europe.

The Chinese zelkova I planted was a gift of a colleague who taught philosophy, Rabbi Jacob Adler. Jacob, a keen plantsman, worked summers at the Arnold Arboretum and somehow came in possession of a small Chinese zelkova which he gave to me. Although I don’t know it is the case, I like to imagine that the tree is a descendant from one Schneider brought back from China in 1915, though Mike Dirr says the species was not introduced into the United States until 1920. It was given its botanical name in 1929 by fellow Austrian botanist Heinrich von Handel-Mazzetti, who collected plants in China from 1914-1918.

That plants, especially rare and unusual plants, come and go in commerce is easy to explain.  Oftentimes a batch of seed will make its way to one of the seedhouses that specializes in seeds for the plant nerds of the garden world. A nurseryman may get those seeds, have success growing them and then offer them for sale. Because the availability of seeds is spotty, the market demand is unproven; and because plant nerds are notoriously bad business managers, these oddball offerings may show up for a year or two and then never appear again. These rarities then get scattered about and half a century later, plant nerds like me will stand beneath the tree, scratch their head and wonder how that tree got there.

In a cursory search, I found no one selling Chinese zelkova trees except in bonsai form. They may be out there and would make a good, relatively slow growing but long lived shade tree, but don’t expect to find one at the local big box store. They are hardy from zone 5-8, so should be well adapted across all of Arkansas. The tree I planted has never had supplemental watering and is prospering, even after the awful drought years of 2011 and 2012.