Zea mays Tamales and the Quapaw
skip to main content

Plant of the Week: Zea mays Tamales and the Quapaw

I don’t especially like tamales. This impression was not helped by an experience back in the ‘80s when I had lunch in the front room of a tamale factory in San Antonio, Texas. After eating our fill of tamales, they ushered us to the back room where a machine with two hoppers – one for the corn meal and one for the ground mystery meat – squirted out the finished product. Behind the machine, stacked floor to ceiling, were boxes of USDA Grade A inspected pork snouts. 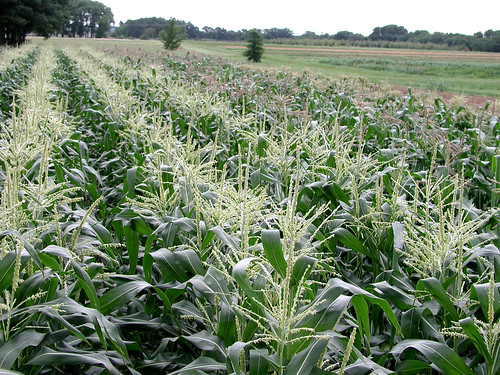 Not knowing much about food history, I always assumed tamales were a part of the Mexican cuisine. The fact that tamales were a part of the food tradition of the lower Delta region always puzzled me, especially after finding them prominently featured on the menu of Doe’s Eat Place in Greenville, Mississippi. At the time (the early ‘80s), few Mexican immigrants had found their way into the region. What gives?

A friend recently lent me a copy of The La Salle Expedition to Texas; the Journal of Henri Joutel, 1684 -1687 (Edited by W. C. Foster, Texas State Historical Association, Austin. 1998). In the book I found the answer to my question about tamales.

The book was written by La Salle’s second-in-command on his second trip to explore the Lower Mississippi Valley. Suffice it to say that things didn’t go well for La Salle, who was the first European explorer to travel the length of the Mississippi River, finishing in 1682. His return voyage saw him missing the mouth of the river and ending in modern day east Texas. After a series of misadventures, culminating with some of his crew assassinating him, Joutel and a handful of La Salle supporters managed to make their way overland to the Quapaw villages at the mouth of the Arkansas River where it dumps into the Mississippi.

The eight or so members of the party largely relied on the good graces of the Native Americans for sustenance and guidance as they made their way across the Gulf Coastal Plain to the Mississippi. This was a time of early contact. Several of the bands in Texas had horses that they had captured from the Spanish, but only a couple bands had a few firearms. As you would expect, the natives fed them what they were eating. One of the commonly encountered foods was a mixture of ground corn with either a mixture of beans, squash seeds, or even watermelon seeds, all boiled in corn shucks. Though Joutel did not use the name tamale, that was the name used by the Cenis of east Texas.

At the Quapaw villages he visited along the Mississippi, he again was fed tamales. There, he commented on the corn fields grown around the village and described roasted ears as something he especially liked. Joutel arrived at the Mississippi on July 24 and reported finding corn plants that had already been harvested, some that were at their peak and other plantings that were much less developed. He noted the presence of peach orchards and especially liked watermelons, which were a new treat for him. These two crops arrived with Europeans (peaches) and from the west coast of Africa, presumably with early slaves, and were quickly absorbed into native gardens.

Joutel described more than 80 bands of Indians, more or less falling into three main groups; the Cenis of east Texas who were part of the Caddo Confederation, the Caddo of southeastern and southcentral Arkansas and the Quapaw closer to the River. While these bands and groups made war amongst themselves, they also traded widely between groups. The trail Joutel’s band followed was one of the long, though not especially well marked, trading routes.

Tamales were definitely a Native American dish, but that doesn’t mean they weren’t modified over time. Many southerners joined the Spanish-American War of the 1840’s and traveled into central Mexico. An echo of that excursion is the hot tamale, with veterans of the war returning home with hot chili peppers to spice up their tamales.