Plant of the Week: Weepers

Of all the plants, I think I love trees most of all. There is something about their grandeur and statuesque beauty that make them as appealing to me as a Greek god carved in marble. Trees take on many sizes and shapes, depending of course on how they wear their genes. But within each species there is still a range of growth forms. Some are tall and skinny, some short and broad. A few are weeping and grow up to become a mound of branches. 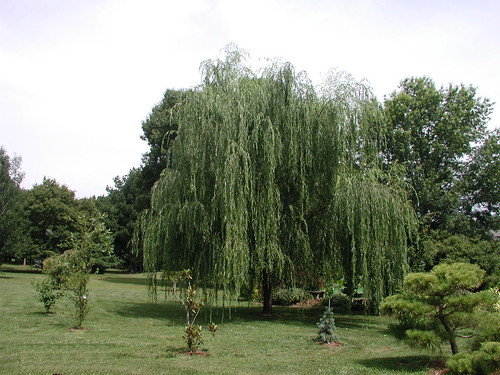 The weeping growth form – usually designated as cultivars named “pendula” or just weeping whatever – occur widely amongst trees. In the still young arboretum collection at the Botanical Garden of the Ozarks in Fayetteville I have weeping forms of about a dozen species and I’m just getting started with the collection. There will be more, for I can’t help myself. Oddities attract me.

Weeping forms of upright growing conifers such as bald cypress, notably the New Zealand introduction “Cascade Falls,” and the weeping Norway spruce called “Pendula” are gawky and awkward in their youth. All knees and elbows, they sprawl about and can’t quite get their act together. Staking may be required to help them move forward into a specimen you would want in your garden. But one day they will pull it together and begin to shine.

Most weeping trees – think here weeping cherries, the weeping katsura or weeping willow – are more graceful in their youth and put forth long, flowing branches that sway in the breeze. These are amongst the easiest to site in the landscape because their soft, more natural form fits better with other landscape plants. But when identifying a planting spot, remember they grow as a pile of branches so can occupy a large footprint in the overall landscape.

My theory on why weeping forms exist so widely in nature is that, in weepers, wood hardening is delayed during the developmental stages of new branch growth. New shoots of woody plants go through a developmental sequence from softwood growth, to semi-hardwood to hardwood. Think about an okra pod. On day four, it is soft and succulent, but by day six it is a thick toothpick.

Cell walls have two stages of development. The primary cell wall forms first as cells expand to their full size in the initial burst of growth as the stem develops. It consists of a complex matrix of cellulose, hemicellulose and pectins and is usually thinner than the secondary (outer) cell wall that forms later as the branch transitions from the softwood to the hardwood phase. The outer cell wall contains cellulose, hemicellulose and lignin and the length of the polymer fibers is much longer, and stronger, than those of the primary cell wall.

This transitional dance from softwood to hardwood is regulated by enzyme systems. I suspect that in trees with a weeping habit, the transition to hardwood status is delayed, maybe by just a few days. But, as the length of the branch extends, gravity takes hold and the branch bends down as it elongates. The secondary cell wall goes ahead and forms, but by that time the stems have formed their pendant shape.

I like to use weeping plants as specimens – almost as garden statuary – where they stand out against a background of more traditional shapes. They also work well as a foil for the boxy rigidity of structures. Perhaps more than most other landscape plants, pruning can be used to great advantage to accentuate the natural artistry of the weeping form.