As gardeners, we hate weeds. Can’t help it. Just hate them. But sometimes even lowly weeds can do interesting things. A few months ago I had some tree stumps dug out of the ground at the Botanical Garden of the Ozarks in Fayetteville. The site was leveled off with the existing soil and, because it was in our service area, nothing was replanted. In a few months, a nearly complete groundcover of common mullen (Verbascum thapsus) occupied the site. 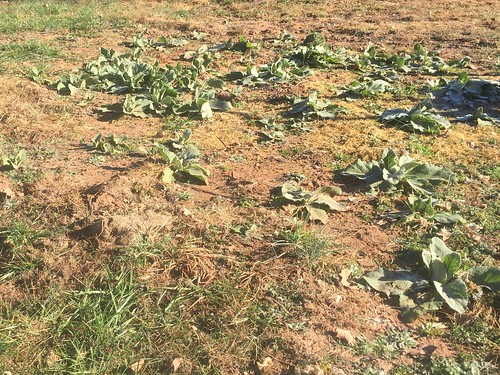 This example demonstrates the regenerative capability of mullen in particular and weeds in general. The mullen seeds had been there for heaven only knows how long, awaiting their chance to grow. They were part of the soil seed bank. Though there were undoubtedly other weed seeds in the seed bank, only mullen found conditions to its liking to flourish.

Mullen, a biennial weed that produces a rosette of gray-felty leaves in the first season and a five-foot spike of yellow flowers in the spring of the second year is one of our best examples of weeds that remain viable for a long time in the soil. In a Michigan study started in 1879, common mullen seed remained viable for 150 years.

Weeds have developed several strategies to achieve their goal of world dominance. Some, like crabgrass, produce lots of seeds. One plant has the potential of producing 150,000 seeds. Crabgrass seeds only remain viable a relatively short time in the soil, but there is always a crabgrass plant lurking somewhere in the neighborhood to make a deposit in the seed bank.

Another strategy is to package the seed in a thick, impenetrable seed coat to keep the stored food reserves and the embryo safe until conditions are right for germination. The extreme example of this is water lotus seeds found in a Chinese peat bog that was dated at 1,200 years old. Some plants in the hibiscus family have hard seed coats, and one such weed survived to the 150-year mark in the Michigan study. We are advised to soak our okra seeds overnight in warm water to help imbibe its hard-coated seeds.

In a Virginia study begun in 1902, 107 assorted plants were buried in clay pots and dug up over the next 40 years. After one year, only 77 percent germinated, with most of the failures being cultivated plants. After 10 years the weeds dominated, with 64 percent germinating. At 20 years, 48 percent of the species germinated; 30 years, 41 percent; and at 40 years, 34 percent sprouted. Obviously, outwaiting weed seeds is not a good strategy for having a weed free garden.

The mullen seeds that germinated were awaiting light. It was the signal needed to trigger the cascade of biochemical changes that would permit the embryo, which had been in a state of suspended animation, to begin growing. The red paper poppies used as a symbol for Veteran’s Day was adopted because of a similar disturbed soil event. When a field was dug in Flanders, Belgium in World War I to receive the war dead, it turned to a sea of red the following spring when the buried poppy seeds made their way to the light.

From a practical standpoint, other than using preemergence herbicides to prevent germination or keeping the soil mulched to eliminate light, there is little you can do about the buried weed seeds in your soil. But, as a watchful gardener, you can eliminate weeds early in their life cycle to prevent making more deposits to the soil seed bank.