After more than a decade working at the Botanical Garden of the Ozarks, I’ve retired — again. We oldsters stick together, so I’ve heard the old “what will they do without you?” comments, but in truth we all know the next generation will do just fine. I had this pointed out when I asked the young man who is my replacement if he knew a plant I’d propagated from the U of A horticulture garden that was unidentified in that garden. He didn’t know it either, but being a proper plant nerd, he belonged to a plant id group on the web. Overnight, a contact at Kew Garden in London identified it from a picture Jonathan had taken as Viburnum obovatum, or “Mrs. Schiller’s Delight,” a selection of Walter’s viburnum. 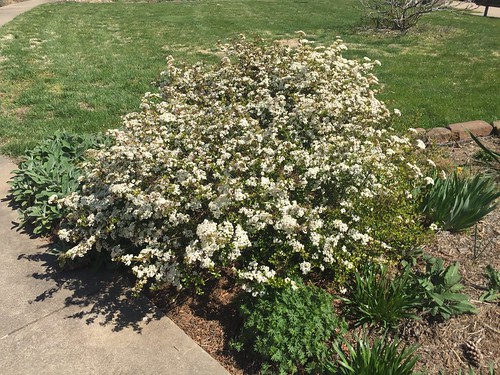 The 170 or so viburnums are described from the northern hemisphere. They are mostly large woody shrubs or, occasionally, small trees of the new Adoxaceae family which also includes elderberry (Sambucus). About 30 species are native in North America, including V. obovatum, which grows in the gulf coastal plains of South Carolina, Georgia, Florida and Alabama.

In its native range Walter’s viburnum grows as a multi-stemmed shrub to 12 feet tall and wide. There (primarily zones 9 and 10), it is evergreen with the small, 2-inch-long and half-inch wide, sparingly toothed obovate leaves which take on some red or maroon coloration in colder weather. In colder regions, plants become semi-evergreen or may completely defoliate when temperatures drop below 10⁰F. The forms that are being propagated for sale have very shiny green leaves in the summer, unlike many plants in the wild that are said to have rather dull foliage.

Small, five-petaled, non-fragrant white flowers about a quarter inch across are produced in showy 2-3-inch corymbs in late winter or early spring. Blooming, especially on the dwarf selections, can be heavy with the plants completely covered in flowers. Small, red, turning to black berries typical of other viburnums are produced in late summer.

Walter’s viburnum is so named because it was first described by Thomas Walter (1740 – 1789) in his 1788 Flora Caroliniana, the first botanical flora describing native American plants using the then-new Linnaean binomial system of plant naming. Written in Latin, it is not very accessible to we gardeners, but his description was good and the species name has remained unchanged and unchallenged since his time. Dirr calls this species “Small Viburnum,” but the name refers only to the size of the leaf, not the size of the plants. Perhaps “Littleleaf Viburnum” would be a more fitting common name.

During the 1990’s, this species began to move from botanical obscurity into gardens, but it was not until the early 2000’s when the dwarf selections first appeared, that it received much notice. To date there are four dwarf, shiny-leafed selections on the market with “Whorled Class” and “Mrs. Schiller’s Delight” being the most common. These plants are often said to grow to 3 feet tall by 4 feet wide, but given time they may double that.

“Mrs. Schiller’s Delight” was named by Florida plantsman Steve Riefler, who saw in the dwarf form of this viburnum a resemblance to a commonly grown dwarf yaupon holly cultivar, “Schilling.” The association led him to name it after his friend, Mrs. Schiller.

For a plant native to the moist, sometimes flooded creek banks of the lower southeastern states, this viburnum seems surprisingly drought and cold tolerant. It has grown in Fayetteville for about eight years, so should be hardy statewide in Arkansas and reliably hardy to about 0⁰F. it is good in full sun or light shade where it can be used in foundation plantings, as an informal hedge, or even as a closely cropped hedge.