I gave up trying to nursemaid plants considered “challenging to grow” a long time ago. I lack the skill and patience to coddle and cajole plants that don’t have some tenacity about them. Georgia Blue creeping speedwell (Veronica umbrosa ‘Georgia Blue’) is now blooming in the rock garden and it is my kind of tough survivor. 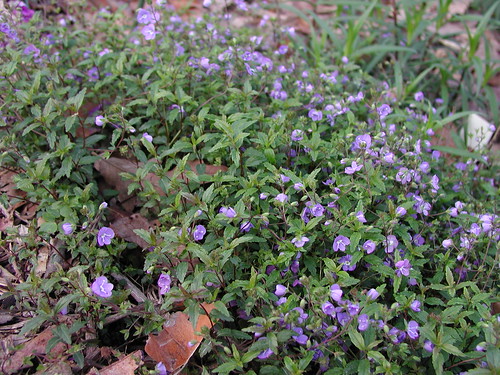 About 500 species of veronicas are described in the northern hemisphere, with creeping speedwell native to the Georgian Republic. Georgia is in the Caucasus Mountains on the east end of the Red Sea and sits at the juncture between East Asia and Europe.

Veronica is classified as a member of the plantain family. Back in the old days before DNA analysis became such an important part of plant classification, the plantain family was a small group of lawn weeds with only three genera. Today, due to the arcane rules used by taxonomists, the family has been expanded to more than 100 genera and includes some very un-plantain like plants such as snapdragons, foxgloves and penstemons.

This plant is usually listed on the internet under the name of Veronica peduncularis, apparently because the early herbarium specimen submitted to Kew Gardens in London was misidentified. The error was eventually corrected but only after Georgia Blue veronica had gained popularity in gardens around the world bearing the wrong name.

Creeping speedwell is a prostrate evergreen perennial herb that grows to about 6 inches tall and spreads two feet or more in diameter. It has inch-long opposite, toothed ovate-linear leaves attached to slender purple stems. Leaves are a medium green during the growing season but take on burgundy tones during cold weather.

The lavender-blue flowers are about half an inch across and begin appearing in February and continue through mid-April. The three lower petals and the slightly larger upper petal fuse around a short white tube creating an eye, from which are exerted a pair of prominent white pistils. It does not seem to produce viable seeds, perhaps because “Georgia Blue” is the only clone grown.

This fine garden plant showed up in the American nursery trade in the 1990’s with so many other new plants and has gained appreciation wherever it has been grown. It was discovered by Roy Lancaster in 1979 when he was traveling in the State of Georgia in the southern reaches of the old USSR. Lancaster, born in 1937, became interested in gardening as a child and has had a tremendous impact on the English garden scene through his long running TV program and other media outlets. He has collected plants throughout the world, especially China.

Georgia Blue creeping speedwell is an easily grown groundcover that is hardy from zone 6 (5 with protection) through 9. It grows in full sun or light shade in any reasonable garden soil provided conditions don’t get too droughty in the summer. A tough plant, I’ve grown it for more than 15 years and have never considered it weedy or wimpy.

It is good in a rock garden or planted as a groundcover for an area planted to small bulbs. Propagation is easy by division in the fall or early spring.