As a kid roaming our north pasture I stumbled across a solitary sandstone rock about a foot tall with some indecipherable carving on it. I always envisioned this rock as the grave marker of some lonely and now forgotten cowboy who punched cows before Oklahoma was opened for homesteading in 1889. Being remembered is important. One of the grandest ways to be remembered is to have a plant named after you such as Arkansas’ native narrowleaf ironweed, Vernonia lettermannii. 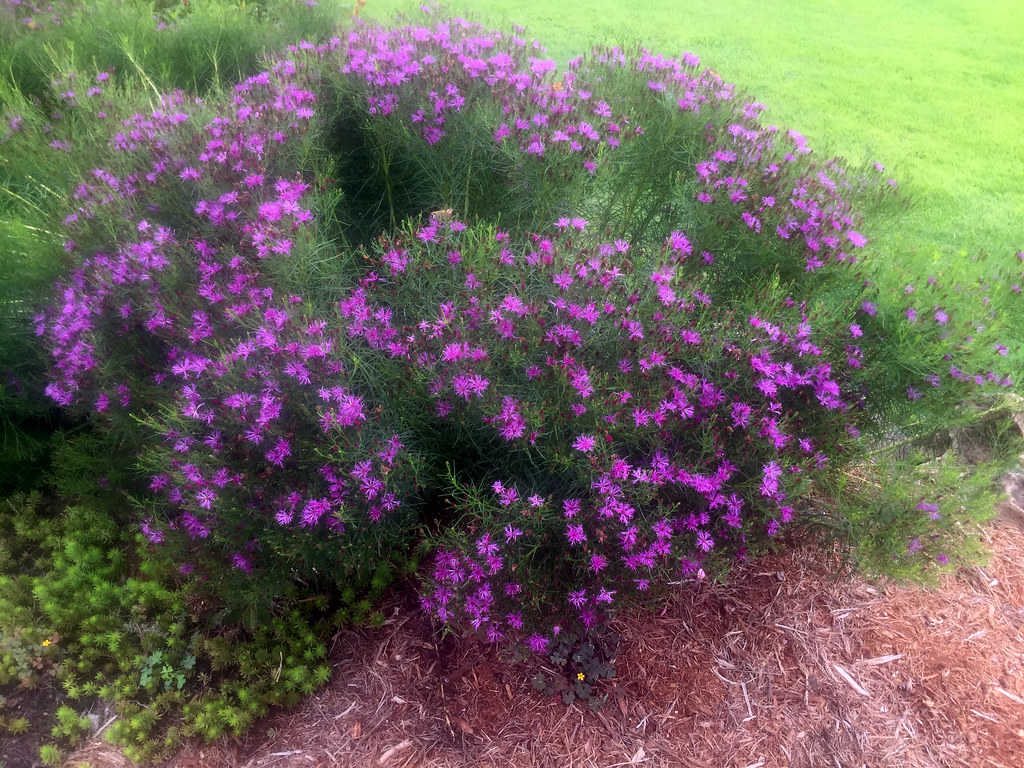 Threadleaf ironweed is native to a few counties in west-central Arkansas and adjacent Oklahoma that drain into the Ouachita River basin. In its native range this species occurs on gravel bars and adjacent rocky outcrops in droughty, sometimes flooded sites at an elevation of 600-900 feet. Ironweeds are members of the daisy family with all species endemic to the New World. Seventeen are described from North America; however, some treatments add a rogues mixture of more than 900 Old World species, making for a confused mixture.

Narrowleaf ironweed is typically two feet tall and three feet wide; a long-lived, tap-rooted herbaceous perennial with stems that originate from a dense crown. It has entire, 1/8th-inch-wide by 3-inch-long leaves that cover the unbranched stems from top to bottom.

From early August through September the plant is topped with open clusters of purple disc florets joined into an inch-wide head. Ironweeds are favorites of a wide range of butterflies and are often covered with them. Allan Armitage, the University of Georgia plantsman who has introduced a number of fine plants, selected “Iron Butterfly,” a vigorous and floriferous selection from seeds obtained from Arkansas sources.

Vernonia lettermannii was first described botanically in 1880 from material collected in Arkansas, probably by Edward Palmer (1831-1911). Palmer, an itinerate botanist, collected plants for the Harvard botanists Asa Gray and the St. Louis based George Englemann, who jointly named the species, probably from one of Palmer’s collecting trips to our area. In 1863 he used Fort Gibson (near modern day Muskogee, Okla.) as his base and explored the region during July and August, when narrowleaf ironweed would have been in flower.

The plant is named for George W. Letterman (1841-1913), a reclusive botanist said to have been famous amongst plantsmen of his day. Letterman had a one room cabin near St. Louis and collected plants from the Meramec River, the principle river system that drains the northern portion of the Ozark Highlands and enters the Mississippi River near St. Louis. He had plants in four different genera named for him. Botanists who assign Latin names to plants don’t always assign them to the person who collected the specimen. More commonly they use the epitaph as recognition to someone who has helped them in their previous work.

For us, this ironweed has been easy to grow and is attractive throughout the growing season. It should be grown in full sun in any reasonable garden soil. It tolerates alkaline conditions well. Butterflies, skippers and moths all favor the plant when in bloom. It can be used near the front of a border or planted in mass for perennial bedding. It is hardy from zones 4-9.

For more information about horticulture or to see other Plant of the Week columns, visit Extension’s Website, http://www.uaex.uada.edu, or contact your county extension agent. The Cooperative Extension Service is part of the U of A Division of Agriculture.