Plant of the Week: Tuberous Roots

Survival of perennial plants during periods of dormancy rely on a variety of underground storage structures. Recently we discussed tubers which arise as modified stem tissue formed from underground stems. Today, let us consider tuberous roots. 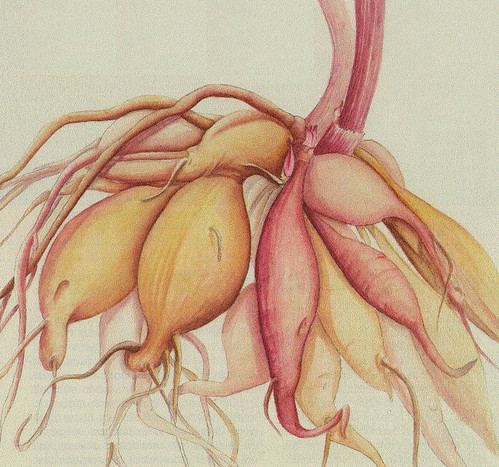 The difference between roots and stems is obvious. Roots (mostly) grow below ground while stems (mostly) grow above ground. But there is another important difference. Stems have nodes and internodes where new buds form while true roots do not form nodes.

Because roots do not have nodes, most plants cannot regrow from just the root pieces. However, there are many exceptions to this generalization. For example, silver poplar (Populus alba) and Callery pears (Pyrus calleryana) can produce new shoots from true roots. Silver poplar produces a copse of new plants as the original tree grows whereas the Callery pear only produces new shoots if the parent plant is killed and larger roots remain behind in the soil.

Tuberous roots are found in a number of plants including asparagus, airplane plant, dahlia, daylilies, peonies, some irises, sweet potato, taro, and many others. In these plants, swollen roots form at or near the base of the original plant.

When a tuberous rooted plant is planted in the spring, it produces normal roots that spread out and explore the soil for water and nutrients. As the plant grows during the season, excess carbohydrates produced in the top of the plant are shunted downward to the roots where they are stored as starches in the roots. These starches begin accumulation near the base of the original plant, so the root tissue closest to the stem (the proximal end) are usually larger than the portion farthest (the distal end) from the stem.

Though these swollen roots lack nodes, most will develop adventitious buds on the portion nearest the stem as the enlarged roots reach full size. Sweet potatoes, for example, are propagated by “slipping” the tuberous root. Growers place whole sweet potatoes on their sides in a bed of sand and allow these adventitious buds to grow. The new slips form at the proximal end while a few roots grow from the distal end of the sweet potato. As the slips (new shoots) grow, they form new roots at the base of the stem. These new, well rooted stems are broken off and planted for the following season’s crop.

Each tuberous root has the capability of producing a new plant, but usually the tuberous roots grow in a tangled mass of roots and stems. Instead of starting from a single root piece, plants such as dahlias, daylilies and peonies are divided so that several swollen roots are still attached to a portion of the old stem. The plant that emerges from this cluster of storage roots will grow faster and perform better than when just a single root piece is used.