Anticipation is a big part of gardening, and I probably spend more time hovering over my small trillium bed anticipating the arrival of these woodland wonders each spring than any other spot in my garden. Growing trilliums is good for character development because it teaches patience. On a hike along the Buffalo River yesterday, I found the Ozark wakerobin (Trillium pusillum var. ozarkanum) in bloom. 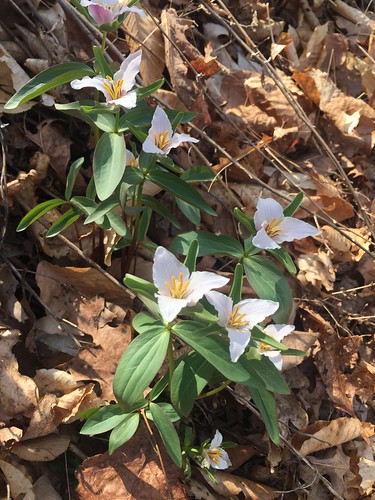 Most of the 46 species of trilliums are native to temperate North America with only four species found in mountainous regions of Asia. Arkansas is home to five species, all of which have fairly wide distribution in the eastern woodlands. Long considered a member of the lily family, new taxonomic treatment has moved them to a splinter group called the Melanthiaceae.

Trilliums are easy to identify as such because everything comes in threes. Each flowering stem that arises from the ground bears three leaves, three sepals, three petals, and when pollination occurs, a three-chambered capsule. In reality the stem of a trillium is always below ground growing as a stout, erect rhizome.

The Ozark wakerobin, also called the dwarf wakerobin, is found growing in moist, woodlands in sites where beech trees are often found in the Ozarks and Ouachita Mountains of Arkansas. The species epitaph translates as “very small,” an indication that this species is daintier than most other trillium species. Taxonomists have had trouble with this species because it occurs in widely disjunct and scattered populations from east Texas, to central Tennessee and northern Alabama and coastal regions of Virginia. Originally, each of these isolated populations was given a separate name, but today most have lumped them into two groups: var. pusillum and var. virginianum.

The Ozark wakerobin grows 8-10 inches tall with the three green leaves ovoid in outline and narrower than most of our other native trilliums. The single erect flower is produced on a short peduncle and supports three slightly rolled green sepals which subtend the three showy white petals. Flowers start off a pure white, turning pink and finally light maroon as they age. In a clump it is not uncommon to see flowers of different ages displaying all three color variations.

Trilliums are available in the nursery trade but be sure they come from growers who grow their own plants from seed or divisions of their own established clumps. Seed production is slow, with five years often elapsing before the first flowers are seen. Because trillium populations in the wild have been decimated by collection, never dig plants from the wild.

My trillium bed is a raised bed with good drainage filled with a little topsoil, a little sand and a lot of composted leaves. It is in light shade all day. The bed is a part of a drainage slope from the hill above, so is usually kept uniformly moist. Trillium seedlings are appearing at the foot of the bed in the pathway, indicating that even the heavier clay soil is sufficiently well drained for the plants provided the site is sloping to carry away excess moisture. Trilliums can be divided and moved, but expect a year or more delay before moved plants even start to grow. My experience tells me that the less disturbance, the better with these woodland beauties.