Over the years we’ve adopted several dogs and promptly changed their names.  The old ones just didn’t fit.  The pups didn’t seem to mind and somehow the new name just seemed right.  Plant cultivars are always having their names changed too, and because they are propagated and sold, the same plant may have several names.  Sweet Kate spiderwort, Tradescantia x Andersoniana Group ‘Blue and Gold’ is a good example. 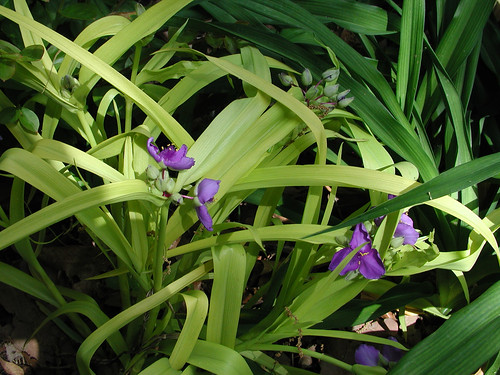 About 75 species of Tradescantia are described from the Americas.  Some are cold hardy temperate perennials while others are scrambling tender houseplants.  They belong to the dayflower family and are almost uniformly distributed across the landmass of the New World.  Since the introduction of the first species, T. virginiana, to England in 1629, both the temperate and tropical species have been grown as ornamentals.  Today they can be found escaped across much of the world.

The Andersoniana Group of spiderworts are complex and confused hybrids of the temperate North American species such as T. virginiana, T. ohioensis and T. subaspera.  The winter hardy garden cultivars, of which 30 or more are currently offered, mostly belong to this complex assemblage.

Generally speaking, the garden forms are clump forming perennials growing 18 to 30 inches tall with long, fleshy leaves with a prominent midvein.  Stems are stout with flowers produced terminally in clusters in the spring and early summer or after a period of active growth.  If cut, the stems produce a clear, vicious sap that, according to some references, dries into a strand that looks a bit like the silken strand of a spider.

Tradescantia flowers have three petals and are to an inch and a half across with six fuzzy internal stamens.  Usually only one to three blossoms are open at a time in the cluster of flower buds, so the effect is nice but not a solid mass of flowers.  Individual flowers only remain open a single day, but blooms are produced over a month or more.

Dan Heims, perhaps best known for his work with Heuchera breeding is the progenitor of the Charm Series of spiderworts, unequivocally refers to ‘Blue and Gold’ and ‘Sweet Kate’ as synonyms.  ‘Sweet Kate’ made its debut to the garden world in 2000 at the Chelsea Flower Show in England, having been found – or so the story goes – in a Mrs. Stevens’ garden in Rusthall, Kent.  She named it after her blonde-haired daughter, Kate.

‘Blue and Gold’ is an older clone by several decades, and if not identical, differences are too minor to notice.  It could be that Mrs. Stevens did indeed find the new, golden-leafed spiderwort in her garden.  It could have been a plant of ‘Blue and Gold’ left by a previous owner or even a plant she herself had planted but forgotten about.  Or it could be a seedling of ‘Blue and Gold’.  Tradescantia are self-sterile so must be cross pollinated to set seed.  The inheritance of golden foliage – probably a mutation in the chloroplasts and, as such – seems only to be transmitted through the seed parent.

But, given the new plant craze that swept the garden world over the past two decades, who could resist this showy newcomer.  Even if it wasn’t actually new, it was new to the current generation of gardeners.  And it had a nice name and an alluring back story.  Who wouldn’t love it?

These golden foliaged spiderworts produce the brightest foliage in full sun, but in most parts of the United States the summer heat is too punishing and they become tattered and unattractive by mid-July.  Light shade with uniformly moist soil is best.  They are hardy from zones 5 through 9.