Plant of the Week: Tillandsias – the air plants

Most of us tend towards laziness if we can get away with it. Perhaps this – and because a sleek and modern aesthetic of home décor seems to be washing across the nation – explains a recent trend I’m seeing in houseplants. Air plants, the bromeliad cousins of Spanish moss (Tillandsia) which are said to require little in the way of care, are being seen everywhere the past couple years. 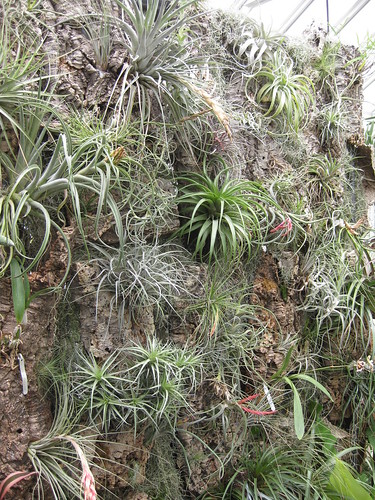 Tillandsias are but one of the 50 genera and 3,500 species of bromeliads that are found across much of the Americas. Tillandsia is the largest bromeliad genera with over 550 species. They range from South Florida, through the Caribbean, across to Arizona, south through Central America and all the way to Argentina. Thirteen species and two natural hybrids are recognized in the Flora of North America, with most native to the tropical regions of Florida. Spanish Moss (T. usneoides) is the most common of these and occurs as far north as southern Virginia and even into south Arkansas.

The Tillandsias are called air plants because they seemingly live off of just the moisture in the air. Almost without exception, Tillandsias are rootless epiphytic plants that grow in clusters of rosettes that have from six or so slender, sometimes curled leaves emerging from a swollen, bulb-like base to many-leafed rosettes looking like miniature pineapple plants. The rosettes may be from the size of a teacup to a small plate across.

Air plants absorb moisture directly from the atmosphere by a cleverly arranged covering of leaf hairs called trichomes. The trichomes have a hollow stalk with an umbrella like end that can be smooth and fluffy to the touch or rough and scratchy and give the leaf a gray, silvery or white appearance. During misting the hollow trichomes fill with water and quickly transfer the moisture to the inside of the leaf. While the trichome base is engorged with water, the plants look green. As the trichomes empty, the leaves take on their normal silvery color. This silver sheen reflects about 40% of the light off of the plant and keeps it cooler, thus reducing the demand for water.

My experience with these air plants is mostly positive, though I have a tendency of breaking the rules. I started with a string of five plants glued to sea shells. After three years, three of the five species are still alive. I grow my assortment on my mostly shaded back patio during the summer where they are required to fend for themselves. I may squirt them with water a time or two during the summer, but mostly rain and humidity are all the moisture they get. So far I’ve not fertilized my little hanging atrocity, but maybe I’ll get around to it next year. A misted application of houseplant fertilizer applied monthly should do the trick.

In the winter I move them to a shaded patio window, directly above a heater vent. This has worked better than I expected. Plants dry fairly quickly so I take them to the sink and give them a good misting every couple weeks. The experts tell me I should mist a couple times a week, but I’m one of those lazy gardeners mentioned in the first paragraph.

A trend I’m seeing in modern interior design is to place air plants in an open globe, often filled part way with a white chipped rock base. These plants are placed on the base with the globe placed in a location that receives good light but not direct sun. Starting on a weekly schedule, remove the plant from the globe and soak it for half an hour in a basin of water. Based on the appearance of the plant, adjust the soaking frequency as needed.