Little, tough plants always impress me. But, being little, they are sometimes overlooked.  Wall germander (Teucrium chamaedrys) is a plant I’ve grown for years but it is too diminutive to reach up and grab my attention. 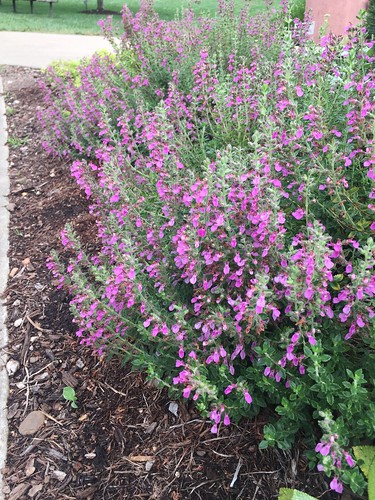 Over 280 species of Teucriums are described in the northern hemisphere.  The genus belongs to the mint family, with the center of distribution around the Mediterranean region of Southern Europe and Asia Minor.  More than half a dozen species are described in North America with Teucrium canadense native to Arkansas.

Wall germander is native to the Mediterranean region and grows as an evergreen subshrub with a woody base and one and a half inch long, deep green pubescent leaves.  Plants are about six inches tall in the winter and a foot or more when in flower. The leaves vaguely resemble the outline of an English oak, hence the species epitaph which translates as “ground oak”.  The leaves and square, young stems are covered with short hairs.  When crushed, the leaves give off a scent vaguely reminiscent of garlic.

The flowers are produced on an erect spike in early summer with six blooms per node.  The spikes are from six to eight inches long and the plant is quite showy when in bloom.  Bloom colors are in shades of pink or lavender.  Individual flowers are tubular, a half inch in diameter with the lower lip much expanded and the upper lips reduced to a pair of erect, Doberman ear-shaped petals.

The name Teucrium is an old Greek name for Teucer, the first King of Troy.  The name germander – unrelated to political gerrymandering – is a Medieval Latin name for the plant that was derived from the Greek name khamai + drus, or ground oak.

Wall germander has been used medicinally from ancient times and was primarily used to treat gout or as a part of a “cure what ails you” concoction called Venice Treacie.  This Medieval concoction contained 64 ingredients, including the leaves of this herb and a little opium for good measure.

Wall germander, hardy from zones 5 through 9, is grown in gardens today as an ornamental.  In more formal days it was a popular plant for outlining formal parterre beds where it was grown as a closely cropped evergreen to surround other flowers or as a mass of green to create intricate geometric patterns.  It is still used this way in many formal French gardens.  In our more relaxed age, it is used as an informal groundcover or as a part of rock garden plantings.

Teucrium is best in full sun or light shade in any reasonable soil.  I have grown it for years in moderate shade but there it only produces a few scattered flowers.  Once established it is quite drought and heat tolerant.  Once plants bloom, shear back to tidy up the plant and allow the evergreen leaves to fill out before winter.