Plant of the Week: Taproots

Everyone knows that roots grow below ground and are important in keeping plants alive, but oftentimes that is the extent of our knowledge. Over the past few weeks we have looked at several below ground storage organs, several of which were not roots at all but modified stems that stored food reserves. Today let us consider the quintessential root, the taproot. 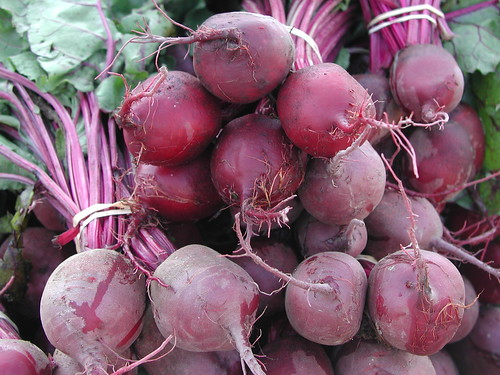 When a seed germinates it produces a shoot and a root, which is called the radicle. This radicle, in the purest sense, is a taproot. Taproot growth is under the hormonal control of auxin, the hormone that causes young shoots to grow up and young roots to grow down. However, most plants quickly abandon this simple structure as the radicle stops growing downward and a fibrous network of roots form which are better adapted to absorb water and nutrients.

But, some few stick with the taproot model and it continues to grow downward during the first season of growth. Several root vegetables – turnips, radishes, carrots, beets, and a few others – store their food reserves in their swollen taproots. These vegetables are biennials. The first season they grow vegetatively and produce a large store of food reserves in the taproot which will be used by the plant during its second and final season when it flowers and then dies. As gardeners, we short circuit the scheme and harvest the roots at the end of the first growing season.

Some plants such as dandelion, pokeweed and the wildflower winecup are perennial and form larger and sometimes deeper taproots each season. I once spotted a pokeweed growing beside the White River that had had its soil washed away by a flood. The thing was as large as my arm and about as long.

Trees often start life with a taproot, but the taproot only grows downward during the first season. As the taproot extends during that first season, small feeder roots arise from it at various places along its length. These feeder roots differ from the taproot in one important way. They do not respond to auxin and grow horizontally in the soil. Instead of responding to gravity they grow and expand in response to water, nutrients and oxygen. In practice, this means that most tree roots are within the top 12 to 18 inches of the soil profile where there is enough oxygen to allow for respiration.

As these horizontal roots grow larger, many trees produce prop roots that grow at a forty-five degree angle of the taproot. As these develop, they provide extra support for the top of the tree as it gets taller.

Pecans, hickories, black walnuts and oaks tend to have strong taproots. In a deep, rich bottomland site first year trees will quickly grow to about a foot tall and then stop growing. Below ground, the taproot will continue growing through that first year, sometimes reaching as much as four feet in depth. Feeder roots develop along much of the depth of this taproot, forming a deeply rooted, difficult to dig plant.

In poor, shallow soils the taproot may only grow down a foot or so before it hits an impenetrable layer and stops growing. Hickories and many upland oaks make do with a shallow root system whereas pecans, the bottomland oaks and black walnuts often fail to thrive in such shallow soils.