The plant kingdom is populated with any number of odd and unusual plants. This diversity is what keep many of us plant nerds coming back to the well to see what new and unusual plants we can find. In the season of ghosts and goblins, what could be more appropriate than considering the black bat flower (Tacca chantrieri)? 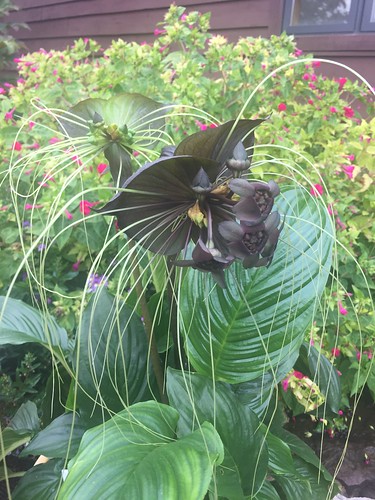 The black bat flower, also called devil flower and cat’s whiskers, is an unusual tropical herb belonging to the Yam family of Southeast Asia. About 15 species are described, with this one native to Malaysia, where it grows as part of the tropical understory.

Plants form slender tubers with bright green elliptical leaves that are marked with recessed vein tracks and capable of growing to eighteen inches long. If conditions are to their liking, the leaves are evergreen but prone to die off with the changes of the season, only to be replaced by new ones.

The flowers are held aloft on stout stems above the foliage and, though sometimes produced in any season, usually appear in greatest number in late summer, fall and early winter in North America. The flowers of black bat flower are subtended (backed) by a pair of black, bat-wing shaped bracts that can be as much as six inches across.

Next come a set of 30 or so long, drooping, greenish whiskers (called bracteoles) that occupy a space between the large subtending bracts and the true flowers which are produced on a pair of elongating cymes in the center of the flower. The flower buds, which open sequentially, first appear as candy-kiss shaped buds that open as six-petaled, maroon-black, inch-wide flowers with six stout stamens. Flowers have no significant fragrance.

There is no good explanation for the unusual appearance of the flowers and the long, whiskery bracteoles. Some suggest that the flowers may have had a fetid smell at one time and the appearance and odor somehow attracted pollinators. Others suggest that the greenish whiskers aid in photosynthesis in a low light habitat. My guess is that there was possibly an association with a now-extinct pollinator.

Black bat flower is not the only Tacca species grown. When Polynesian people left Southeastern Asia to populate the wide islands of the Pacific Ocean, they took with them T. leontopetaloides. It had been long cultivated for the starch derived from the fat tubers. In modern times the plant is still seen but mostly its place has been taken with corn starch. Also, grown as an ornamental, is white bat flower (T. integrifolia).

Bat flowers are not common, though they are sometimes offered in nurseries in subtropical regions along with other specialty plants and from internet sources. They should be grown as a houseplant during the winter but spend most of their time out of doors in the summer. Avoid exposure to direct sunlight at all times, but during the winter, give them as much indirect light as possible. A highly organic potting soil with good drainage and uniform moisture is best.  Repotting in the spring, and dividing if the tubers are becoming crowded, will keep the plants growing vigorously.