Fads and fashions are fickle friends. What is popular one day is not the next, and the causes are not always clear. Gardening too has its phases, with adoration of anything native now driving the bus. Some native plants are nice, but if show is what you want in your garden, the exotics sometimes make a bolder statement. The American snowbell (Styrax americanus) is an attractive plant, but its Asian cousin is points ahead when garden worthiness is evaluated. 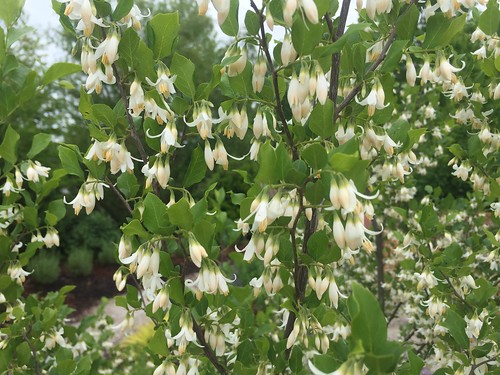 The snowbells – not to be confused with the snowball viburnums – are a large group of 130 species found in the southern parts of the northern temperate regions of Asia, Europe and North America.  It is the founding member of the Styrax family that includes ten other genera including Halesia (also called snowbell) and Sinojackia (yet another snowbell) that are sometimes seen in gardens.

The American snowbell is found in the southeastern states, including eastern Arkansas and Texas, along rivers and streams. It is native in the lower part of the Ohio River valley, down the Mississippi and scattered throughout the southeast.

American snowbell is a shrubby deciduous tree growing six to ten feet tall with dense, uniform branches originating from the base and up the main trunk of the plant but not suckering from the roots. It has two to three-inch-long, toothed, light green elliptical leaves with a short petiole.  Fall color is yellow-brown if it occurs at all.

One to four, white bell shaped flowers with five widely reflexed petals appear on short branches produced from axillary buds. The non-fragrant flowers are an inch wide with a cluster of prominent yellow stamens protruding from the center of the blossom. Flowers appear after the foliage in mid-May in northern Arkansas. The fruit is a dry, gray, pubescent capsule produced in the fall. In bloom the plant is quite attractive and covered with flowers.

American snowbell is attractive as a late blooming shrub but easy to overlook. In the wild it is usually found in heavy shade and so seldom produces knockout displays. If planted in the garden where it gets a modicum of care it produces a great display, but it is still a shrub. Styrax japonicus, a dogwood sized plant, is similar in appearance but has up to six flowers per flowering branch and just produces more of them. And it’s a tree. Additionally, about 20 clones of the Japanese species are described while the American snowbell still remains rare in nurseries.

While American snowbell is typically found in the shade in its natural habitat, it will tolerate full sun so long as watered. Plants should be given a good, reasonably fertile, moist site where they produce the best flowering display with good, bright light. They can be used as a small specimen near a patio or as part of a mixed shrub border. American snowbell is hardy from zones 5-9. Plants are offered by native nursery specialists and can be found on the internet.