Greenbriers were one of the first plants I learned to name. As a kid tromping through the creeks of our farm, I learned all about greenbriers and their unforgiving ways. Intellectually I know that greenbriers (Smilax), in their many and varied forms, are interesting, but it is hard to forgive them for all the scratches they inflicted on me in my youth. 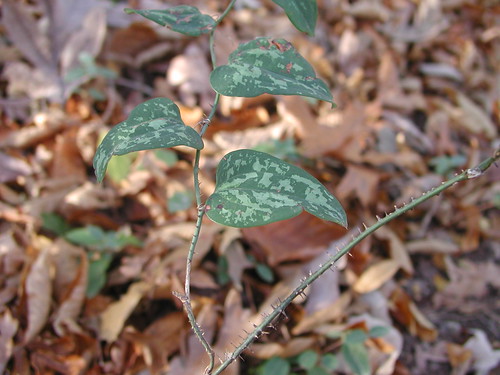 Smilax is an ancient genus that consists of more than 250 species of tropical and warm-temperate vines that were long considered to be part of the lily family but are now separated into its own unique plant family. North America has about 20 species with 11 found in Arkansas. Plants may be either woody or herbaceous, but it is the spiny, woody forms that most people think of when the name greenbrier is mentioned.

Usually solitary or only a few vines emerge from large storage roots (crowns) or from wide-ranging rhizomes. The rhizomatous species tend to form tangled thickets of greenbrier stems that are almost impenetrable, except for small wildlife that often use them for shelter.

Stems of the sprawling vines, which are supported on surrounding vegetation by tendrils and their hooked thorns, remain green for several years. In the spring the still-succulent green shoot tips can be eaten, much like asparagus. Thorns may be absent, hooked or bristly and straight, depending on the species.

Of the woody types, the thick, vaguely heart-shaped leaves may be either evergreen or deciduous. Leaves are alternate down the stems with the nodes widely spaced. S. glauca has a dusty gray coating on the undersurface of the leaf. S. bona-nox has mottled gray-maroon foliage that is quite beautiful in young leaves. 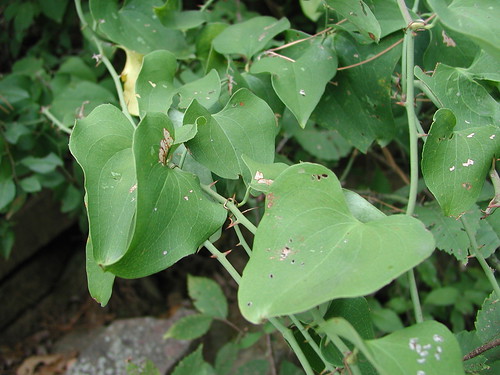 Greenbriers are dioecious with either male or female flowers that are non-descript and appear during the height of tick season, so are seldom noticed. Berries are black, blue or red, depending on species. The berries are edible and favorites of many songbird species. Each berry usually contains a large, single seed.

Smilax rhizomes and crowns were at one time used as a starchy gruel by Native Americans. Roots of one of the Caribbean species was used in the original making of sarsaparilla, the soft drink of choice before carbonated beverages. During the Civil War, southern forces fermented the roots and made a bit of weak beer from it. Today, several naturally occurring steroidal compounds have been identified from the plants.

Greenbriers are not considered proper ornamentals, but essentially thornless forms of S. smallii, Jackson Vine, and the red berried S. walteri are interesting evergreen forms that can be trained to walls, chain length fences or even used as a short, linear hedge. All greenbriers do best in moist, acidic bottomland sites with good soil. They will tolerate full sun but are usually associated with shady locations. Jackson Vine (S. smallii) is the only species of climbing Smilax that seems to be sold, and that is not commonly offered in retail nurseries.

Ridding a landscape of greenbrier sprouts is best done by cutting the plant to the ground and digging out the rhizomes or crowns. Even if that is done, diligence at keeping fast growing sprouts cut back will be required for several years until the random bits of the rootstock is depleted of its reserves.