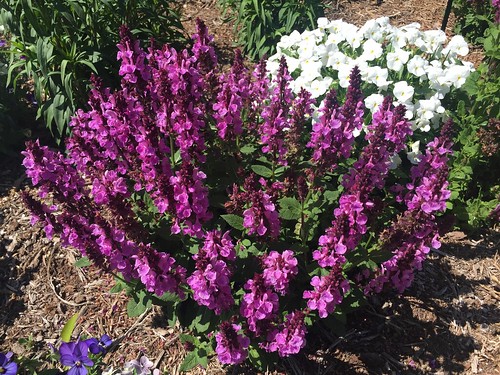 As a gardener, I go through phases. Now I’m into shade loving plants because my trees have grown and sun is a scarce resource. But at one time I went through my salvia phase – a group of decidedly sun-loving perennials. A new perennial salvia (Salvia nemorosa “Rose Marvel”) has caught my eye at the Botanica Garden of the Ozarks and bears a closer look.

Salvias are a diverse group of plants in the mint family with almost 1000 species described from all corners of the world. Salvia nemorosa, the woods sage of southern Europe and Central Asia, is an herbaceous perennial that grows as an upright plant from 1-2 feet tall, with stems arising from a tight crown. Rose Marvel is about 14 inches tall and wide.

The opposite, aromatic leaves are 2-3 inches long, bright green and produced from the square stems which are one of the easy to recognize features of the mint family. Mints are considered deer-proof plants but that doesn’t guarantee they won’t munch on the flowers just out of spite.

The flowers of Rose Marvel sage are produced on erect, 6- to 8-inch-long spikes at the ends of the stems. Individual flowers are produced in a whorl of blooms up the spike in a multi-flowered unit called a verticillaster. Flowers are encased in a prominent red-striped calyx that stand above the opened flowers in the characteristic way of the mint family. Individual flowers are tubular with the upper petal hooded and erect while the three bottom petals – especially the large central petal – much expanded and providing most of the visual punch of the flower.

“Blue Marvel” (pp 27,018) was introduced in 2016 to much acclaim and several industry awards, so I suspect other color choices will be offered in this series in coming years. Blue Marvel sage, and probably by extension Rose Marvel, was developed in Netherlands in a controlled breeding program initiated in 2010. Rose Marvel sage is a 2018 release of Ball Seed Company and Darwin Perennials and is currently undergoing the patent process. Unquestionably of hybrid origin, I suspect there may be some Salvia greggii in its background.

Lissa Morrison, the BGO designer, tells me that they have grown the plant for two years and have been impressed with its performance. It starts blooming early, being in full bloom by the first week of May in 2108, and will continue to bloom through much of the growing season if sheared back after each flush of flowers. Side dressing with a light application of fertilizer will assure the growth necessary to keep the plants blooming.

Though called the woods sage, locate it in a sunny spot or where it gets late afternoon shade. Good wintertime drainage is essential to keep these plants going as perennials. Once established they have good drought tolerance. Plants are winter hardy from zones 4-9. Divide as needed every three or four years to keep the clump vigorous.