The first houseplant I ever knew was an African violet. In the 1950’s, my Aunt Sis grew them in her living room under a bank of fluorescent lights, where a few years later I saw my first dead body, my great grandmother. African violets (Saintpaulia ionantha) are not even closely related to violets, but they are from Africa. 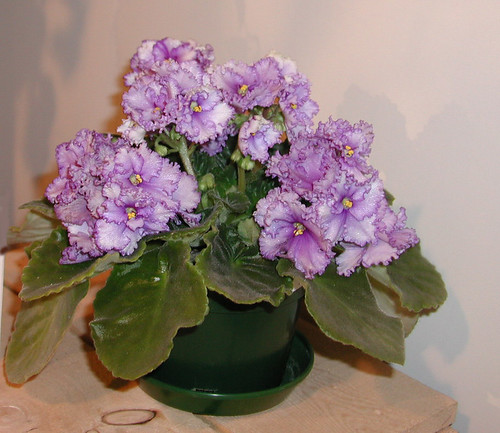 African violets are members of the gesneriad family and hail from the tropical rainforest region of east Africa near the border of Tanzania and Kenya. Though numerous species of Saintpaulia have been named over the past century, DNA testing now limits the number of species to six, with eight subspecies. The first species named, Saintpaulia ionantha, - in its many and varied forms - remains the prototype for the plant we all know.

The African violet was discovered in 1892 by Baron Walter Von Saint Paul about an hour from Tanga in modern day Tanzania. The baron, realizing the plant was different, sent specimens to his botanist father in Germany, who in turn shared the find with a friend at Royal Botanic Garden in Hanover. This botanist, Herman Wendland, realized the plant was new to science and named the genus after the Saint Paul family and coined the species name “ionantha” which in Latin means “violet like.”

The rosette of hairy, fleshy leaves little resemble a violet but the shade of blue found in the five-petaled flowers are like that of the common violet. Most plants form rosettes 8-10 inches across, but “minis” are popular with fanciers and make rosettes in the 3-inch range. Variegated leaf forms are also commonly seen in selected clones. Leaves, which form adventitious plantlets during propagation, have a long petiole and a rounded, spoon-like shape

Through breeding the color range of the flowers has been extended to pink, white, purple, maroon and something approaching yellow. Double flowered forms are favorite forms.

African violets are essentially plants of the 20th century with commercialization beginning almost immediately after discovery. The rights to distribute the plant were sold to the German seed company Ernst Benary in 1893. This company provided seeds to W.K. Harris, of the Harris Seed Company in Philadelphia, in 1894. Although grown locally in the U.S., the real popularity of African violets in America began after 1927 when the Armacost and Royston Nursery in Los Angeles released a number of hybrids including “Blue Boy” and “Sailor Boy.”

In the first chain-store venture in plant selling, Woolworth & Co. sold these new hybrids in all their stores, making African violets popular nationwide. They were a perfect mass market item. They were cheap to produce, shipped well, flowered under indoor conditions, were new to most people and their price point fit the low price model of the early mass market retailers.

African violets are easy to grow if all of the rules are followed. First, they must have a highly organic potting soil and this potting mix must be kept uniformly moist. To accomplish this task, many growers use various wick watering systems. Plants should be fertilized regularly during periods of active growth and flowering. Being tropical, African violets should never be exposed to temperatures below 55 degrees.

The most exacting requirement for African violet culture is getting the light right. These plants are “photo accumulators”, meaning they require a given quantity of light energy before plants will flower. But because they are understory plants, they should never be exposed to full sunlight conditions. Ideally, plants should have between 500 to 600 foot candles of light, which is about the amount of light received on a north window sill in the summer. In the winter that amount of light is about what is available in an east window. Some gardeners choose to use artificial light and place fluorescent or LED lights 12 inches above the violets. If the light is managed correctly, and the plants are fertilized during periods of active growth, it is possible to produce three flushes of blooms a year from the plants.