The 2019 spring blooming season has been spectacular, so it is not surprising that a group of heat tolerant rhododendrons I planted a decade ago had their first really spectacular season. These Southgate Rhododendrons, developed by Louisiana rhododendron enthusiast John Thornton, are a good example of the chain of events necessary to move a worthy garden plant into the public spotlight. 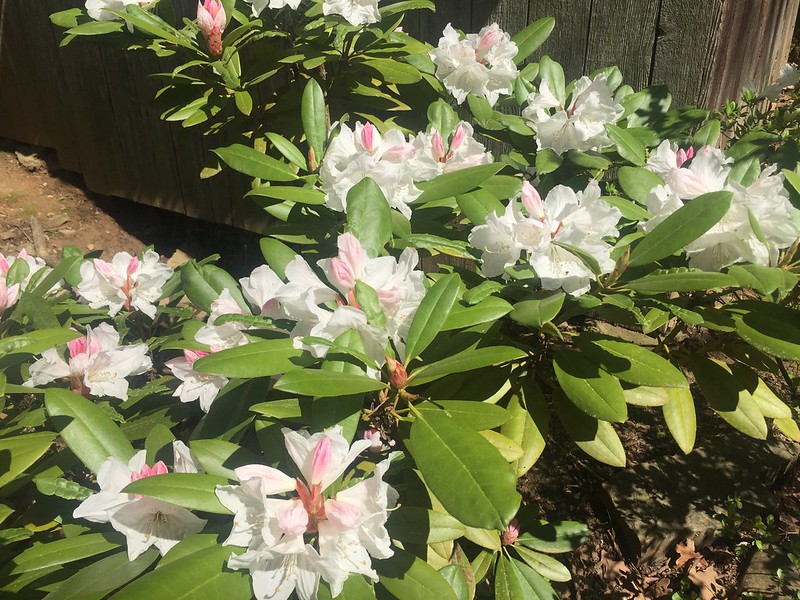 Rhododendrons are a large group of about 1,000 species of ericaceous plants scattered around cool, usually mountainous climates in the northern hemisphere. Botanists – in an uncharacteristic spirit of lumping – combine deciduous azaleas, evergreen azaleas and the several types of broad-leafed evergreen rhododendrons into this single genus. The older techniques of visual comparison of plant parts and the new DNA analysis support this rather cumbersome assemblage of plants. Arkansas gardeners know azaleas well but have found rhododendrons more difficult to grow and have mostly shied away from them.

Rhododendrons are large leafed evergreen trees capable of reaching 20 feet in height and spread, provided they are growing on a cool mountainside in a moist, temperate climate. Most of the rhododendron selections available to gardeners are called “iron clads,” old selections that were developed from species that grow in the southern Appalachian mountains and the mountains of Asia. These iron clads are tough plants, but still more at home in cool, moist climes than the heat and humidity of the South.

Dr. John Thornton, a Louisiana native son went north to Michigan to receive his veterinarian training in the 1960’s. There he saw his first rhododendrons and, after learning about them in a class on poisonous plants, decided to plant some around his Franklinton, Louisiana home. He planted what he could find, but not surprisingly, even the iron clads all died after being planted in his garden about 50 miles north of New Orleans. This failure lead to him joining both the American Rhododendron Society and the Royal Horticultural Society in London. Both groups had seed exchanges, and John taught himself how to grow rhododendrons from seed.

He tried almost two dozen wild rhododendron species, but finally identified a Taiwanese species, R. hyperythrum, as having good blooming characteristics in his hot, humid climate. As a bonus it had good phythoptera root rot resistance, a major disease problem for rhodies. Most of Thornton’s hybrids used R. hyperythrum as the male but ‘Divine’ used a different Taiwanese species, R. pseudochrysanthum, as poppa. His strategy was to use iron clad selections as the female parent and the hyperythrum parent at the male.

He made his first crosses using this parentage in 1974, and three of the clones he registered in 2004 were from these original crosses. Over the next two decades he crossed and back-crossed amongst the plants he raised, finely selected seven individuals he thought worthy of giving names. During this period of evaluation, he shared seedlings with friends around the region, so some his crosses were actually introduced by others. Most of these clones reach about 5 feet tall and wide in 15 years with the white, lavender, pink or pink and white flowers appearing in mid spring.

I planted Southgate™ “Divine” Rhododendron under the name of “Lisanne Rockefeller” in 2008, using the name John had registered it under in 2004. But in 2012, big business came a-knocking, and the folks at Southern Living Plant Selection picked up the plants to include in their mass market offering. Southgate became the series name for the heat tolerant rhododendrons and “Divine” became the trade name for the cultivar known as “Lisanne Rockefeller.” Same plant, different name.

The heat tolerant rhododendrons are best planted in raised beds filled with composted pine bark and a little sand. Their need for acidic and moist, but never wet, soils remains, but their parentage and selection in a hot, humid environment gives them good heat tolerance. They bloom best when given bright light – such as under high-canopy pines – but not full-force southern sun. Though still not as easy to grow as azaleas, these big-flowered beauties have a shot at becoming a southern garden favorite.