If I were more organized, I’d probably be diagnosed with obsessive-compulsive disorder. I try to record things like bloom dates – I want to record them – but I don’t always get around to it. Looking at my garden logbook, I find that I’ve done pretty well with my Festive azalea over the years. I have 13 peak bloom dates entered since the planting was made 20 years ago. 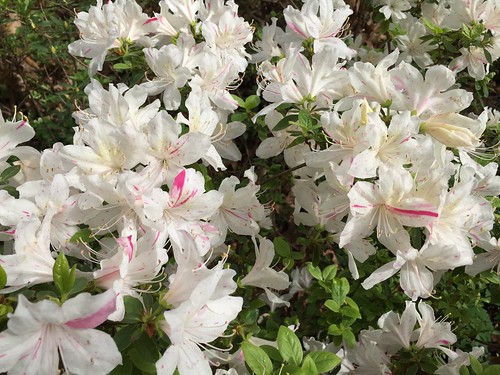 Festive, a Glenn Dale azalea, is one of the 10,000 or so named azalea cultivars, but only a fraction of these – probably on the order of a couple hundred – are available in the nursery trade. The Azalea Society of America, a self-help group for those of us who can’t get enough azalea diversity in our lives by relying on those chosen for us by commerce, propagate and share hundreds of other clones that have been developed by commercial and hobby breeders over the past century.

Festive is described as a six-foot-tall and wide evergreen azalea, though mine is only half that size after 20 years in the ground. It has two-and-a-quarter-inch single flowers that appear white but are actually marked with subtle streaks and occasionally bold blotches of purple-red running lengthwise down the petals.

B.Y. Morrison, (1891 – 1966) was hired by the USDA as a rose breeder, but azaleas were his true love and became the focus of his research over the last 25 years of his official career. In 1928 he began making crosses in his own back yard but by 1929 he had convinced his bosses that azalea breeding was a better fit, so he launched his official breeding program at the Glenn Dale Plant Introduction Station in Glenn Dale, MD. Because of his access to many new azalea (Rhododendron) species and cultivars that were introduced to the United States in expeditions to Japan and China in the 1920’s, he was uniquely positioned to breed large-flowered, evergreen azaleas adapted to the Mid-Atlantic region.

Festive was the result of a cross between two old Japanese clones, “Vittata Fortunei” and “Ho Oden.” As the seed parent, “Vittata Fortunei,” was a favorite of Morrison’s because it had clear white flowers marked with purplish-red streaks and it reliably set seed when pollinated by a range of species and clones. It was the seed parent of 71 of the 454 Glenn Dale azaleas he released. The pollen parent, ‘Ho Oden’ was a selection of a cold hardy species, R. mucronatum, which figured in the background of many of his introductions because it extended the growing range further north.

Festive is an azalea with a low-chill requirement. Azalea flower buds form after mid-July, the summer before they bloom. Releasing these blooms from dormancy requires a prescribed number of “chill hours,” the number of accumulated hours experienced between 32⁰F and 45⁰F. I find no record of the number of chill hours required for Festive, but it is probably in the 400-500-hour range. Even during a warm winter, it is easy to log that many hours.

My Festive has bloomed from as early as March 18 until as late as April 15, with an average bloom date over the last 20 years of April 6. After the record-breaking warm winter of 2016-17, it looks like it will be in full bloom around March 6, a month ahead of average. The times, they are a changing. The major threat of early bloom time for azaleas is not the loss of flowers in a freeze, but splitting the bark if the plants are too far advanced and the temperatures drop below 25⁰F and stay there for more than three hours.

Hopefully that won’t happen this year, but should a hard, late freeze occur, plants should be checked for popped bark. As drastic as it sounds, cutting the plant back to almost the ground – but only if the bark is popped lose all around the stem – can save the plant.